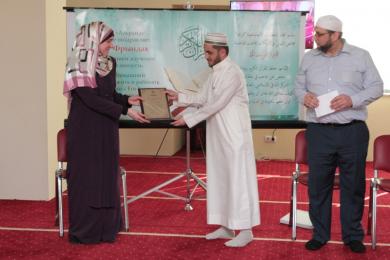 Now she is authorised teach this style of recitation herself

A festal occasion took place at the women hall of Kyiv Islamic Cultural Centre mosque after the Friday prayer: one of the participants of the Qur’an reciting circle “Al-Firdaws” (facilitated by the Centre of Women Development “Maryam”), Ms.Vira Fryndak, completed reciting the Holy Book due to r hafth an Asym degree.

The event itself, with all the female parishioners present, began with Ms.Fryndak’s recitation of her final Surahs under the supervision of Shaikh Haydar Al-Hajj, Deputy Head of AUASO “Alraid” Mr.Ismail Qady, her family and sisters in faith. Now, when she’s got her certificate verified, she is authorised teach this style of recitation herself.

Vira learned her first surah 17 years ago, when her husband (of Syrian origin) began teaching her Arabic alphabet. “Arabic writing seemed much like hieroglyphs to me,” — the hafidha recalls with a smile. — “I couldn’t even dare to think back then that I would be able to read long surahs some time in the future, not to mention learning the whole Qur’an by heart.”

Since then and up to early 2014 the hafidha, with hits and miss, increased her knowledge: she wrote the Arabic text and then wrote the translation, and only after having this done she could start memorizing. She learned vernacular Arabic during those years, and managed to memorize 8 juzz. There still were, however, surahs she found hard to even read from the book, not to mention learning by heart.

“It seemed to me all the time that i can’t succeed in my study because I had very little free time. If only I start learning during vacations or sick leaves, I thought, things would be sooo different!...”

Those attempts, however, weren’t fruitful: there were lots of things to do about the house during vacations and as for the sick leaves — the capacity of an ill person to study wasn’t high.

Still, if it weren't for bad luck have no luck at all: Shaikh Haydar Al-Hajj, a teacher at the Higher Medrese of Hafidh in Crimea, was forced to leave the peninsula after Russian occupation and move to Kyiv. Shaikh wasted no time and facilitated several groups for teaching everyone villing how to read and memorize the Holy Book. Under his command, another parishioner, Ms.Samia Arada completed her reciting on hafth an Asym degree. Inspired by her success, Vira decided to try and set to work.

“It’s ironical that I managed to memorize the Qur’an during the year when I had more work than usual: my new position (Ms.Fryndak is the Headmistress at “Our Future” Gymnasium that started its work at Kyiv ICC last fall, — ed.note) brought new responsibilities, and, besides, I entered a University to gain alternative higher-education degree...“

Ms.Fryndak thanked her teachers for being patient while correcting her every time and reminding her to go on, her parents who taught her to strive for knowledge, her husband who always supported her and had complete faith in her, and also her brothers and sisters who were always eager to help her with her everyday duties when they put her memorizing schedule to risk.