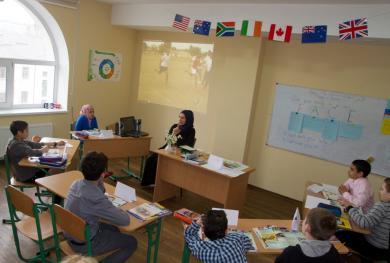 “We love English” was the motto of the two past weeks at Gymnasium “Our Future” functioning at Kyiv Islamic Cultural Centre. This was their own was to summarize the results of their first operational academic year, testing the pupils’ knowledge of not only the language itself, but the culture, traditions and everyday life of English speaking countries as well.

As told by Ms.Irina Grudanova, a teacher of English, she and her colleague Ms.Maria Gudz never tried to turn the kids into professional simultaneous interpreters within one year, which is impossible. It was the Gymnasium’s first academic year, and it absorbed pupils from different schools with different background of knowledge, so the teachers did their best to motivate each child develop vivid interest in learning foreign languages (the Gymnasium teaches Arabic as well).

According to Ms.Grudanova, their English study plan is based on Oxford programmes, European recommendation for linguistic education, and the textbooks recommended by the Ukrainian Ministry of Education.

English is taught from the very first gra and the teaching process is based on the spoken language where children are encouraged to speak this language during rolepay, creativity classes and games. For instance, the GYmnasium held a creative contest where the pupils nad to reveal both their artistic and linguistic skills.

When there’s a contest — there have to be winners. 4th grade pupils, for instance, won the “best joint work” award, Ms.Sofia Talaat presented the best artwork among the first grades, Mr.Omar Mareei (4th grade) presented his extraordinary drawing, and Ms.Mumina Isamiddinova (grade 7a) was acknowledged as the author of the best painting.

Both the teachers and the parents could see that those methods were indeed effective during the model lessons.

Ms.Grudanova stressed that it was clear that the Gymnasium’s decision not to participate in nationwide linguistic contests during the first operation year was rather playing safe than the real need, as the pupils demonstrated their profound language skills allowing them to be worthy participants of any contest.