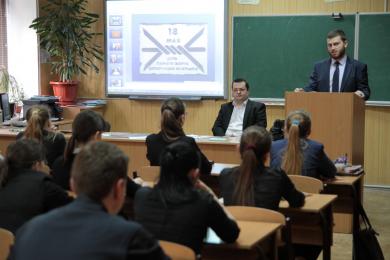 Mr. Dervishev spoke about the process of returning the Crimean Tatars to their Homeland first-handedly

Kyiv city Shevtchenko district Technic Liceum works on its students’ soundly-based education, teaching them to emphasize other people’s grief without making difference between “their people” and “our people”. The Lyceum's administration continue their cooperation with Ukrainian Muslim communities which started with a lecture on Arabic journalism. This time they arrange a themed meeting dedicated to 70th anniversary of deportation of Crimean Tatars. They invited Mr. Rasim Dervishev (Head of Committee of Spiritual Values at Crimean Community of Kyiv), Mr. Oleh Guzik (Head of AUASO “Alraid” PR department) and Mr. Yuri Kosenko (journalist of the information portal “ArabPress”).

It was sybbolic that this meeting was arranged for the three forms of schoolleavers at a History lesson. Introducing the second indigenous people of Ukraine to the schoolchildren was complex. At first, Mr.Kosenko made a presentation about the history of Crimean Tatar people’s formation and development, from the early Medieval to the present. After this, Mr, Rasim Dervishev told about the deportation and shared the stories about those events his own grandparents and other relatives told him. The schoolchildren were of maximum attention, as an opportunity to learn about a historical event from the person, who got the information firsthand, doesn’t fall every day.

The teenagers asked a lot of questions, and answers for them revealed even more traits of that horrible tragedy. For instance, the NKVD troops completely forgot about several Crimean Tatar settlements at the Arabat Spit while deportation was on, and reported to Moscow that the operation was over. When they discovered this miss, they boarded those people (several thousand in number) on some barges, dragged them to the open sea and scuttled them, letting all those people drown…

Mr. Dervishev spoke about the process of returning the Crimean Tatars to their Homeland first-handedly, as he witnessed this process himself.

The meeting ended with a trailer of a movie on the deportation named “Haytarma”. Mr. Guzik gave everyone interested a copy of the “Arraid” newspaper special edition, dedicated to the Deportation, and presented the Lyceum’s library with a book “Crimea: Our blessed land” by the Canadian Professor Paul Robert Magocsi.