“Moral Deed”: There’s a Better Future for Our Country as Long as Our Younger Generation is Like This 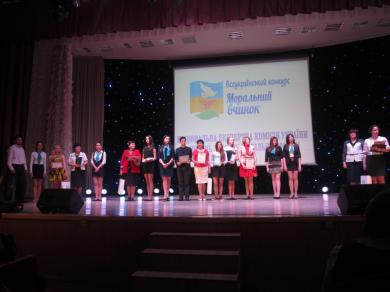 IV Annual “Moral Deed” Children's And Youth Contest Awards Ceremony took place on May 15. This contest has been initiated by the National Commission For Public Moral at sponsor’s and organisational support of a range of businesses and social organisations, including AUASO “Alraid”.

Besides, the Association’s employees took part in the jury, and the Head of “Alraid” PR Department Mr. Oleh Guzik also participated in the awards ceremony.

The contest reveal the depths of morals, humanity and mercy peculiar for our society. Independant Ukraine’s First President Mr. Leonid Kravchuk, special guest of the ceremony, felicitously noted: “Any activity is as moral as much morals the person puts in it. There’s often very little morals in deeds of modern people, think. for instance, of those who commits sabotage and robberies in South-Eastern ukraine now. The politicians who only see our country as a  honey pie are even less moral. For that reason it’s really reassuring when I see all of you here, so young and so caring already — this gives me hope  for Ukraine’s better future. It’s a great honor for me that I can award some of the prizewinners myself.”

Indeed, it’s much easier to believe in Ukraine’s better future when you see these children’s and youth’s project descriptions. These are the schoolchildren raisin big sums of money to help their peers fight oncology — by selling their handmade and arranging charity concerts and plays; these are medical students who regularly visit lonely elderly people for providing constant monitoring of their health; these are children and teenagers of different age who did a range on ecology projects and increased the ecological consciousness around their block or settlement.

The participants held historic and ethnographic studies, facilitated entertainment events for little orphans and oncohematology patients, sought for ways of developing the intercultural dialogue for strengthening peace and consent in our society, etc. Our country has great hopes that the life changes to better as soon as we have such a wonderful young generation of concerned citizens who even at this young age are willing to work for the sake of our society, see problems of those around them and eagerly donate their time and efforts for helping those absolutely strange people.

The quests of the evening could review the project descriptions and see the movies before the awards ceremony.

According to the Head of National Commission For Public Moral Mr. Vasyl Kostitski, the contest gains momentum. 2,000 children participated last year, comparing to 5,000 projects the Commission received this year. Most of the projects were teamwork, so the general number of participants is about 20,000.

Mr.Kostitski noted that this reveals another tendency, not so obvious at first sight: more and more parents not only raise their children based on high morals, but are also willing to support their food initiatives by advice, approvement and action. More and more parents are willing to give their free time to supporting their children’s projects, which, furthermore, strengthens ties between the generations.