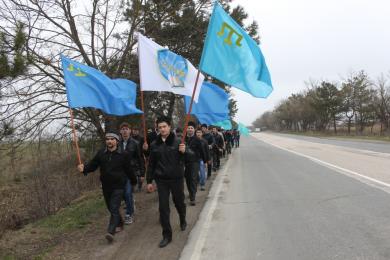 More than 60 young men and girls took part in a march in the memory of Mr. Noman Chelebijihan, facilitated by  the Youth Social Organisation “Emel”.

On February 16 morning the participants gathered at a bus stop in a village with a poetical name Priyatnoe Svidanie (Rus. “pleasant date”) by no means for courting purposes. Having made a joint prayer-dua the activists raised the Crimean Tatar Flags and went to the Bakhchisaray Khan Palace, situated about 20 km. away. It took them 4.5 hours to cover the distance.

Crimean Tatar youth decided to recall minds of their countrymen of all nationalities to the subject of First Crimean Tatar Kurultai (which took place in the Palace in 1917) and its initiator Noman Chelebijihan.

When t the Courtyard, the activists gave open lectures on life and activity of this prominent Crimean Tatar, who struggled for a better Crimea as a home for multiple nation living in friendship and equality. Meanwhile, another anniversary of his unlawful extrajudicial execution, which is February 23,  is near at hand.

Will 20 km be enough to draw everybody’s attention to the question of how ethic it is to celebrate this tragical date (this tradition started by the USSR still lasts)? Mr.Muslim Dervishev, Head of “Emel”, doesn’t believe this is enough; so they planned  several events devoted to the happenings of 1917, and the root march was only the first of them.