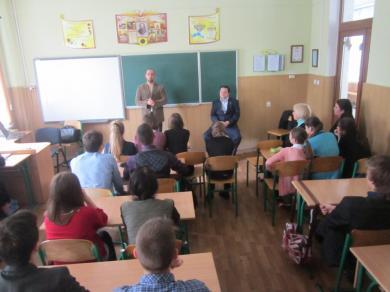 Mr.Sarhan spoke about the history of the “Al-Jazeera” media-holding, which in fact gave a start to modern Arabic Journalism as it is

Kyiv city Shevtchenko district Technic Liceum selects its students competitively. It was founded in 1992 in order to provide high-quality education and development of gifted youth, combining high intellectual and spiritual development of conscious citizens who are ready to choose their future profession. It has, among others, a Journalism Department, which invited the Head of Arabic Sunday School “An-Noor” Mr. Tariq Sarhan and a journalist of the information portal “ArabPress” Mr. Yuri Kosenko to attend the Lyceum on April 24, and explain the peculiarities of Arabic journalism to the 10-11 year students first-hand.

More than 30 future journalists, their teachers and the Headmistress Ms. Elena Ilyushina not only listened to the guests’ reports (each of them lasted for about 10 minutes), but also had a 1.5 hour spirited debate. The teenagers were interested in special aspects of presenting the informational products to the Arabic-speaking audience, the journalists’ working conditions in Arab countries, both everyday living and the legal field, and also impact the religion has on social life and its coverage.

Mr.Kosenko made a presentation about such web-resources as “UkrPress” (Ukrainian news, history, culture and analytics in Arabic) and “ArabPress” (Arabic news, history, culture, tourism and analytics in Russian). He also spoke about Tunisian as a profound example of successful transfer of Arab dictatorship country to democracy, and about different understanding of secularism in Europe and Arab world.

Mr.Sarhan  spoke about the history of the “Al-Jazeera” media-holding, which in fact gave a start to modern Arabic Journalism as it is. Its team members weren’t afraid to bring innovational methods to their work and always tried to keep up. They hired foreign high-qualified specialists and instructors to train their staff. They were among the first to realize the Internet’s potential and were soon represented in the Global Net, first on their website and than in the Social networks.

Special attention was payed for stereotypes about the Arab world and the Muslims.

Mr. Sarhan also gave his visiting cards to everyone interested in learning Arabic at the  “An-Noor” sunday school. The Lyceum Headmistress on her part expressed wish to arrange an excursion to Kyiv Islamic Cultural Centre for her students, and said she hoped that Mr.Safwan Jolac, the “Al-Jazeera” reporter in Ukraine, could pay them a visit and tell about the work of this media holding from within.