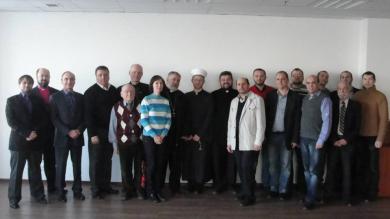 Donetsk Regional Council of Churches And Religious Organisations expressed disquiet for the neighbouring country’s leaders pushing the Ukrainians to split-off in such a tough time as it is. Ukrainians and Russians, Armenians and Greeks, Crimean and Volga Tatars, Jews and representatives of some Caucasian ethnic groups speaking various languages and being of different religions brought there’s no issue that could essentially split the Ukrainian nation home to everybody.

Muslims of the region were represented by Mr. Said Ismagilov, Mufti of RAMU “Umma”, and Mr. Hamza Issa, Head of the AUASO “Alraid” regional branch.

The Council's session resulted in an Appeal to compatriots, where they stressed that all of us, despite the difference in our mindset and culture, are the unanimous nation, solid in its aspiration for peace, safety, welfare and freedom in the whole Ukraine.

The delegates noted with admiration, that the new generation, strong in spirit and preferring freedom and human values to material benefits, is born right before our very eyes.

The Council called upon all the people of good will to pray for peace and mutual understanding between people of different political views, as well as to second our prayers with deeds and cooperate in order to help each other in good.