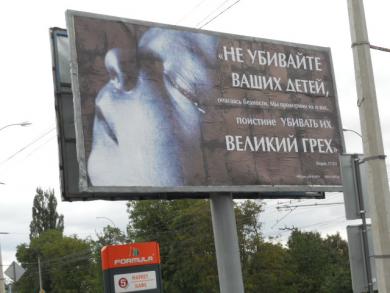 Billboards with public service advertising developed by the Association “Alraid” Department on Family Affairs can now be seen along the streets and tracks in Crimea. There are posters in three designs at present, another three to be done ‘till the end of the year.

According to Tanzilya Isa, Head of Donetsk female social organisation, the Department plans to launch similar socials at Donbass, which is the second largest region of the country with extended Muslim communities, too.

“Alraid” is set on distributing this king of socials during the next 4 years. The issues brought up by the posters are pressing for every human being regardless their religion, namely filial piety, thirst for knowledge, kindness, morality, care of family and children and good neighbourliness.

The project serves to not only reminding Ukrainian Muslims of the true Islamic moral and spiritual values, but also for introducing them to non-Muslims as well. The Association team members consider knowledge of the true Islamic teaching and dealing with pious Muslims living according to that teaching are the best means to prevent Islamophobia.