Basic Islamic Knowledge And Stylish Look: New Muslims Gained Experience And Had Some Rest On The Seaside 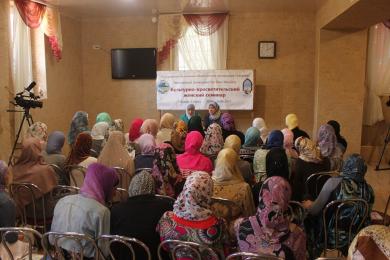 Basic Islamic Knowledge And Stylish Look: New Muslims Gained Experience And Had Some Rest On The Seaside

More than 50 young girls and women aged 15-70 took part in the Female Summer Recreational Camp in Crimea during June, 20-26, 2013. The Camp was held both for new muslims and for those of Muslim origin who just started practicing the religion of their ancestors. Both categories are target groups all kinds of extremists are after, as it is much easier to gain followers among those who are ignorant in the religion and will eagerly believe anything.

AUASO “Alraid” holds such camps in Crimea as well as lectures and seminars in Islamic Cultural Centres across the country, to prevent the radicalization of the new Muslims and provide the participants with basic knowledge of Islam, worship (ablution, prayers, fasting). It’s also a place where people can find new friends who share their views and values.

The advantage of camp courses lies in reinforcing lectures with practice, which makes the information more accessible. The women not only study the basis of Islamic Doctrine, Muslim morals and conditions for prayers and fasting - they also mastered Arabic alphabet and learned how to read the Qur’anic text in the original.

When a woman decides to become an obedient Muslim, it influences her appearance as well. Women want to look good — but it takes experience to look good in any clothes, the headscarf in particular.

The Camp administration met their needs and organized a “How to Wrap a Headscarf” master-class, where everyone could learn different styles of wrapping a headscarf and and select the one that fits them best.

The participants could tell their stories and describe their trips to Islam while introducing themselves. Every story was unique: one converted after studying Islamic literature, the other started looking for the sense of life after losing somebody particular.

But everybody was really impressed by the story of the young girl who managed to escape from Syria. Her international family (with Syrian father and Ukrainian mother) moved to Syria several years before the conflict started. When the war collapsed, they wouldn’t let the mother of the family leave the country due to the lack of one note in her documents.

People kind and fair are everywhere, and an airport officer helped the family get on board, and shortly after they watched the city of Aleppo from above. But her family never prayed so devotedly as during those long hours of waiting...