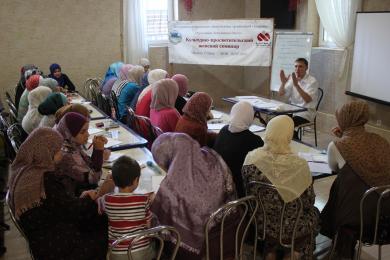 60 young girls and women aged 14-60 studied Fiqh and the Qur’an remembering methods. Mr. Ismail Qady gave a number of lectures on developing traits important for their work, but the most exciting lectures were given by  Shaikh Said Ismagilov (Mufti of the Religious Administration of Muslims of Ukraine) and Shaikh Haidar Mohammad (teacher of the Yemen Hafith Centre).

The Qur’an Recitation Contest and English Lessons For Children

Within the programme of the camp the Qur’an Recitation Contest took place, where the participants competed in two categories, namely “The Event” (Surah 56) and “The Dominion” (Surah 67). Zulfiya Walyushina, Amani Al-Behesi and Feride Vait won top places in the first category, and Manal Kanu, Fatimah AlDibo and Niyara Mamutova were the prize-winners in the second category.

However, the participants spent most of the day talking, swimming, amusement riding, organizing open-air sports and intellectual contests and enjoying the sunny skies of Crimea.

Some activists had their young children with them, and Maria Gudz, who is a teacher of English, couldn't twiddle her thumbs and gave them lessons. Arter her course the kids made a pleasant surprise for their mothers by putting on plays in English.