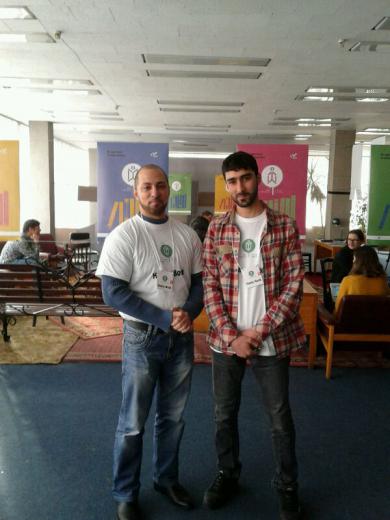 Books of the "Live Library"

It was from 22 till 28 March 2013 that Kiev residents had a rare opportunity to read people like books. This chance is given by the action “Live library” in the framework of the International Festival of Documentary Films about Human Rights (Docudays UA). In the improvised “reading hall” the one who wishes can chose “book” he/she likes. The main rule for “book” users is tolerance and kindness when reading.

Mr.Tarik Sarhan, head of the department for familiarization with Islamic culture at the Public Organization “Al-Nur”, takes part in the action each year. Other Muslim volunteers join him in the actions. According to librarians, the book “Muslim” has evoked live interest and became the most popular with action visitors. Although the library rules envisage that a book can be read by only one person at once, in this case individual reading more often turns into collective readings.

Each “book” is in a way representative of a category of people who are minority in Ukraine by ethnic, religious, professional or other criteria, or members of social groups treated with prejudice by rest of the population for various reasons.

It’s always exciting to learn information about a social group by tete-a-tete contact with its member. If so done, there’s no need to do hard and painstaking work to study scientific books, just to get introduced to the issue, and there’s a chance to look at the practical side of a religion and see how its dogmas, slogans or principles are implemented in daily life. Because one’s outlook cannot be extended when one’s company has no people from social groups that are subject of one’s interest, and when asking strangers is uneasy matter because one is uncertain and fearful about what the response would be.

This problem is solved by “Live library” which motto is “book should not be judged by its title page”, because all “books” readily come to be put on the shelf and a priori are ready to answer questions of everyone who would like to ask, if even one and the same question has to be answered great many times in the day.

Mr. Deya Ashur, a Palestinian, head of the Public Organization “Al-Isra”, and his Ukrainian wife Yekaterina agreed to be a two-volume book that would debunk readers’ stereotypes about Muslim families.

This couple willingly talks with everyone who wishes, irrespective of religious or ethnic belonging, about many subjects, from daily situations, clothes or foods to eternal issues of morals, religion, truth and traditional values.

Deya says: “These stereotypes about us are made up by mass media, films, anti-terroristic extremism of the international community and the heritage of the USSR where “relicts of the past” in form of “religiosity and traditional family” was being fought by all means.  A Muslim must respect his wife and treat her as a human personality and not as a servant or a supplement to cooking stove or washing machine”. Islam teaches us so, whatever may be the clichés in film stories. I should note, however, that although the Ukrainian society tends to show tolerance to followers of other faith, Muslim women are nevertheless looked at as oppressed and uneducated home slaves, and we, man, are believed to be their subjugators”.

“The immediate reaction of people watching a Slavic female Muslim: ‘You are forced by the husband, aren’t you?’”

This couple refutes great many stereotypes by practices and experiences of theirs, their relatives and friends.

Yekaterina says: “I was born in a Christian family and adopted Islam by my own conviction eight years ago. The immediate reaction of people watching a Slavic female Muslim: ‘You are forced by the husband, aren’t you?’” Once they learn that a young lady has not been married yet and never been married or so, they usually become confused.

I used to read and learn much, and I came to take this decision through comparisons and thinking. When I met my future husband, I had practiced Islam for five years, so, nobody can blame him for pressure on me. My mother became a Muslim, too, whereas my father remained Christian”.

Yekaterina, like the majority of her friends among the sisters in faith, studies in a higher education institution and takes part in volunteer projects. She can always rely on assistance and support from the husband in all her good deeds.