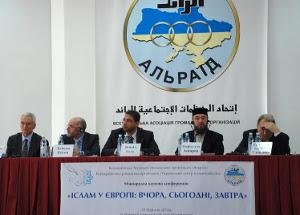 All wishing to learn about the given structure, certainly, will find the necessary information on the organization portal. But, we will agree, neither the news line, nor the detailed description of the actions, even picture stories cannot transfer the heart beat of the person. It only can be felt (or heard). And so, the dialogue with the employees of Alraid helped to catch the "spirit" of the structure. Certainly, it is faith multiplied by activity. The collective works. All of them. Not under pressure, but on the need of heart and reason. The environment here is creative, framed with permanent discussions.

Probably the given approach allowed founders of Alraid to create a wide-profile structure. Here are the most qualitative work of sites, publishing, activity of "personal" propaganda. Moreover - constant public actions.

What is still allocated in the separate line is big quantitative representation of Muslims in the organization. And after all at creation for "the female mechanism" conditions for work (growth), it starts to work with doubled (if not more) energy!

Thus, it is possible to tell about presence in the structure of a group of adherents. But it does not live in itself. Actively supplements and expands activity of Alraid the Religious Administration of Muslims "Ummah" and the Center of Islamic Studies. Coordination in work allows conducting work with representations on places.

Conversations behind a tee-fruit table

Usually in a lobby (as they say) participants of the conferences discuss those questions which do not enter into the topic declared by them for performances. And there is more time, too. And so, conversations behind a tea table very often appear rather productive. Not because here as some may think, "secret" topics are discussed; the speech only goes about a dialogue in informal conditions.

So, one of authoritative Islamic thinkers of the present, the chairman of the council of the European Imams, Heysam Arrahma, having staticized necessity of the creative approach to Islam, urged not to be afraid of various ways of approach of scholars to this or that question. On the other hand, Muslim scholars should avoid representation of Islamic values in the form of a monotonous standard package since it is impossible to use the same methods and receptions in various audiences.

In due time the author considered this topic in details.

Really, the variety of adherents of Islam (and the world community as a whole) causes multi-variant approach to bringing of Islamic values to different categories not stereotyped! "All of us have the same purpose, Arrahma said thereupon, - but let us not to consider ourselves as truth in the ultimate authority, and that sometimes true adherents of Islam wish to see and to hear only themselves, as infallible". We recognize that it is actually one of modern illnesses of the Ummah though tonality modification just expands view at Islam, confirming absence of dogmatism in the Muslim doctrine.

Naturally, behind "the round table" there were also discussed other questions, concerning world geopolitics, a welfare orientation, economic sphere etc. But it is naturally impossible to describe in one article a course of discussions on all of them. Therefore we will stop only on some of them.

When it came to mosques, many wished to hear opinion of the chairman of the Religious Administration of Muslims of the Asian part of Russia, Nafigulla Ashirov, about a situation with their building in Moscow. The co-chairman of the SMR recognized certain problems in this context, as well as in respect of interdiction of separate books of a religious orientation, up to sayings of the Prophet Muhammad (peace and blessings be upon him).

Another matter is that in refraction to houses of Allah, N.Ashirov attracted attention to the following. From his words, the mosque is not the end in itself, and its mission consists far not only in praying in it. The imams of mosques, the scholars visiting them should give to the visitors knowledge - real and extensive. In the light of what erudition, a broad outlook, and intelligence are essential. However, we do not witness this.

N.Ashirov gave an example that in the times of the Prophet (peace and blessings be upon him), in mosques there were open discussions, and many came here for reception of answers to "eternal" questions. And it means only one thing – mosques should bring back their initial importance, in terms of earning credibility as houses of knowledge. Ways of achievement of the given purpose, - N.Ashirov repeated, - are high qualification of the imams, able to conduct educational activity.

At the same time, A. Ashirov was impressed by the activity of Alraid. Most of all he liked coverage by the structure of various "subjects". From his words, it is possible to welcome ability of the collective to combine some directions. "It is really powerful and perspective Islamic centre", he stated. It is difficult not to support the opinion of the head of the RAMAR, when you see the real contribution of the organization to the duty of development of Islam.

By the way, the work of Alraid is noticeable not only for Muslims. And, it is necessary to recognize, if there was no support in this question of state structures, hardly the organization activity would be so successful. But this foreshortening is far not casual. For example, the ex-Minister of Foreign Affairs of Ukraine, the honorable doctor of Diplomatic academy at the Ministry of Foreign Affairs of the country, Gennady Udovenko, named Islam a part of Ukraine since this religion profess  aboriginals of the state, too. Moreover, according to G.Udovenko, the Ukrainian Muslims can bring the considerable contribution to business of strengthening of independence of the country.

The topic of poly-culturalism in the performance at the conference was also mentioned by the head of the department of culture of the Embassy of Germany in Ukraine, Herald Herrmann. We remember discussions on this topic in Germany in the end of the last year (2), and mister Herrmann noticed that they have continuation today, too. From his part he emphasized his consent with the thesis about Islam as a part of Germany. Having added thus that debates are not forbidden.

Anyway, in refraction to Ukraine it is possible to declare effectiveness of the policy of poly-culturalism. As acknowledgement of that it is possible to bring the following fact. The conference finished with rewarding of the winners of the Vth all-Ukraine competition of researches on Islamic studies of young scholars of Аgatangel Crimsky. It is pleasant that among the awarded there were a lot of non-Muslims. It means interest to Islam. A considerable one. And it testifies to only one thing: the Quranic - "O mankind! We created you from a single (pair) of a male and a female, and made you into nations and tribes, that ye may know each other (not that ye may despise (each other). Verily the most honoured of you in the sight of Allah is (he who is) the most righteous of you. And Allah has full knowledge and is well acquainted (with all things) " (The Holy Quran, sura "Hujurat": 13) - is claimed and effective that confirms firmness of the Revelation for all times!

Let us hope that this situation in Ukraine will remain, moving the society forward and promoting strengthening of statehood of the country.

Coming to the end, once again we would like to mention the topic of unification of Muslims. What helps Alraid to advance Islam (except considered above parameters)? Here is completely absent estimation of activity by employees of each other (including strength of faith) depending on national context. In Alraid work the Arabs, the Ukrainians, the Tatars, the Azerbaijanis, the Lezghins, the Russians... And there are no any conflicts by sign who is more "correct" for Islam. Respect and authority are won by activity (activity in the field of moving forward of Islam)!

On the other hand, here is obviously formed the unwillingness to divide Ummah of the country on ours and theirs. Therefore there is no opposition between the Sunnis and the Shiites. They pray together, in common discuss burning questions. It would be desirable, that the given tendency remained for all time, or it would be impossible to avoid weakening of the Ummah potential.

N.Ashirov not casually called the intra -Islamic dialogue one of the major problems of Muslim community. According to his words, in some places there was a situation when the part of Muslims faces "one" Islam, and the other part - "another" one. The speech, unfortunately, goes not about forms of bringing of Islamic values to people, but about "advertising" of correctness of their own Madhab only, or "a view on things" of a certain group of people. It is necessary to recognize, that exactly such a "style" weakens Ummah, notwithstanding that "conductors" of Madhab collisions operate ideologically or will be engaged on it by interested forces.

We still have to wish to the Ukrainian Muslims to protect and increase the worked out!

P.S. We would also like to pay attention to one nuance. It is well-known what oriental hospitality is. The participants invited to Kiev "faced" (in a very pleasant frame!) the Ukrainian hospitality. And a Muslim one! No any visitor was deprived of attention of the receiving party. And it was carried out from the bottom of the heart!

As a whole, Ukrainians impressed by their affability, kindness, smile and beauty.