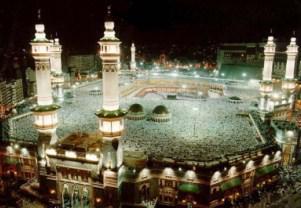 In the beginning of November millions of Muslims go to Hajj - pilgrimage to the main relic of Islam, the Holy Kaaba in the city of
Makkah. On it IMK was informed in the press-service of organizers of Hajj from
Ukraine.

This year the delegation of Ukrainian pilgrims goes to Makkah for performance of Hajj from different regions of
Ukraine (190 persons, among them 39 women, and this is the largest number for the whole history of independent
Ukraine).

Among pilgrims there are several Ukrainian married couples which dream to perform this ceremony together.

The Council of Religious Administrations and Centers of Muslims of Ukraine at the State Committee of Ukraine on Affairs of Nationalities and Religions is engaged in the organization and sending of the Ukrainian pilgrims. Council co-coordinated the Ukrainian quotas with the Ministry of Affairs of Hajj of the
Kingdom of
Saudi Arabia in two consecutive years and intends to take active part in the organization of Hajj of Muslims of Ukraine.