Alraid activists talk about the Prophet in 10 cities of Ukraine 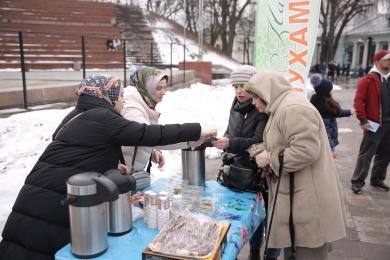 Alraid activists talk about the Prophet in 10 cities of Ukraine

Activists of the All-Ukrainian Association "Alraid" held a mass action in ten Ukrainian cities. As part of the initiative "Inspired by Muhammad" Muslims on the streets of their cities talked about the personality of the Prophet (peace and blessings be upon him) and his life.

According to the initiator of the action, Tariq Sarkhan, the main goal was to familiarize everyone with the culture of Islam, to spread knowledge about the personality of the Prophet (peace and blessings be upon him), his life journey and influence on modern civilization.

“It is no secret that there are many false ideas about Islam and Muslims in the society, many stereotypes are associated with the personality of the Prophet Muhammad,” says Tariq. - They relate both to his prophetic mission and personal life. Therefore, we decided that it would be useful to try to tell people about who our Prophet really was (peace and blessings be upon him). "

The action was held with the support of the World Organization Mercy for Mankind, and aroused some interest, judging by the reports of the participants on their pages in social networks. In general, in all cities, the participants tried to devote as much time as possible to live communication, and not to the banal distribution of booklets and books. An interesting part of the action was the quiz: everyone who wanted to test their knowledge of Islam could try to answer random questions. The activists awarded the correct answer with symbolic gifts.

“To be honest, I was surprised at the general awareness of people about the foundations of Islam,” says one of the activists, Muhammad. - Of course, many could not answer conventionally simple questions. For example, what is the name of a Muslim pilgrimage or a Muslim fast. But at the same time, there were people who easily answered these questions and even found answers to more complex ones. "

In almost every city, the action was held in the most crowded places - in central squares or streets. And that, of course, also had some effect. By the way, the activists gladly treated everyone to tea, coffee and oriental sweets.

“I think we have the right to believe that the action was successful,” says Tariq Sarkhan. - I have already talked to our coordinators in other cities. Almost everyone is unanimous that the action caused the interest and positive reaction of people. For us, this is the evidence of the importance and benefits of this format of familiarizing society with Islamic culture. "

We would like to remind that earlier CSUAUA “Alraid” together with Mercy for Mankind held a number of actions under various slogans.