23.4L of Blood Donated at Kyiv Islamic Cultural Centre During a WO “Maryam” Benefit 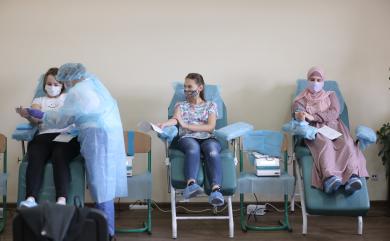 52 Units of blood, or 23.4L, were collected at a charitable Blood Donation event at Kyiv Islamic Cultural Centre. The event, called “Save Lives, Donate Blood, Be a Hero!”, held by WO “Maryam” and a team of medical workers from Kyiv Region Blood Service Centre, took place on 25 September. The blood will cover some of the needs of a range of medical institutions in Kyiv region. Everyone willing could also donate their monetary compensation to people fighting cancer.

Both Muslims and non-Muslims came to share their blood: the benefit was supported by the Centre of Social Service of the Orthodox Church of Ukraine (“Eleos-Ukraine”), land power officers under the command of colonel Roman Khomenko, medical staff from a nearby “Avicenna Med” Medical Centre, and other non-indifferent people who learned about the benefit from social media.

The organizers used all their personal and work contacts to spread the word about the upcoming event as far as possible. In particular, they filmed a motivational video, where doctors, emergency officers, volunteers and opinion leaders invoked everyone to donate blood.

WO “Maryam” was inspired by Stan Donorom! (Ukr. “Be a Donor!”) project, that was holding Blood Donation benefits at Kyiv Islamic Cultural Centre in cooperation with Kyiv City Blood Centre during 2012-2018. According to Ms.Olena Myronenko,  she initiated the 25 September benefit after one of her friends fighting cancer needed blood donors, and as Ms.Myronenko learned that the blood stocks of the regional Cancer Centre were depleting, she offered help on behalf of WO “Maryam”.