Fifth Housewarming In the South Ukraine: the Project “New Home for a Needy Family” Continues 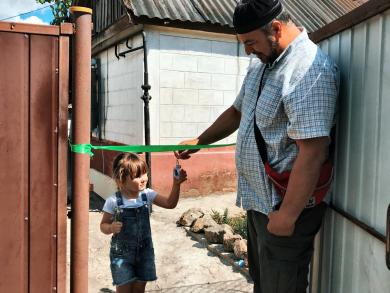 On 13 August, another large family had their housewarming party in terms of the project “New Home for a Needy Family”. The present was supposed to be for Eid al-Adha (that occurred on 31 July this year), but it took some time to renovate and move.

This time, it was an IDP family of three generations who got their very own home. Despite their own need, those people always found time and resources to help others, and became active members of the local Muslim community. It was the local imam who had drawn the attention of deputies from CSUAUA “Alraid” and REMU “Umma” delivering grocery pacts for the needy to that family last Ramadan, for members of the family themselves were too humble to ever ask anything for themselves.

According to Mr.Hamza Issa, Director of Zaporizhzhia Islamic Cultural Centre, the hardest part of their plan was talking the family into accepting that gift, for they were uneasy about it, and their first response was that there were other families in need in that town. Fortunately, they gave way, and the process of raising funds, finding a house for sale, purchasing it and making renovations was launched.

Mr.Issa finds the project “New Home for a Needy Family” interesting mainly for being crowdfunded. He says it’s a very touching scene he’s seeing every time: people living in extreme need have a hard time believing that some complete strangers donated their money to buy them a home, and are going to purchase a house and some land in their name with no cross liabilities. Mr.Issa says the feeling of belonging to such a wonderful initiative is overwhelming.

Noteworthy, this is the fifth house bought in terms of “New Home for a Needy Family” Initiative. The Project continues; should you wish to join, please contact the Zaporizhzhia Islamic Cultural Centre for the detail.