4.5 tons of food in three days ― Alraid delivers aid to the needy 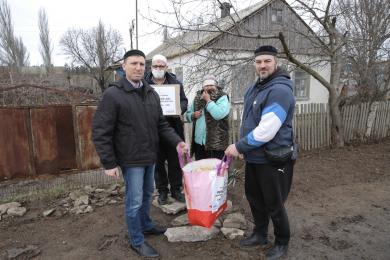 The all-Ukrainian charity initiative was launched in several villages of Kherson oblast: the organisers, Alraid All-Ukrainian Association, and MuslimHelfen German fund donated 150 sets of groceries to the people in need from the local Muslim community.

Recently, due to the cooperation between Alraid and MuslimHelfen, locals received more than 80 tons of coal, and this time the supporters have brought the most essential food products. Seyran Arifov, Alraid chairman, also visited Kherson oblast within the initiative.

“During these days, I saw for myself the challenging situation of some locals, particularly lonely old people, and single-parent families,” shares the association’s head his impression. “We are not even talking about the absence of infrastructure or about poor roads ―you can see that throughout Ukraine. But here people really need constant support and help because they faced dire financial straits. Some houses, one might say, are no longer fit to be lived in.”

Volunteers delivered sets of foods directly to the needy people’s homes. In three days, they have visited 150 families in several localities of the above oblast. Among those provided with the support, first of all, are lonely old people, families with many children, needy families, and migrants from the occupied Crimea.

According to Seyran Aryfov, many people living in Kherson oblast are in trouble, partially due to cutting off the economic ties with Crimea after it had been occupied.

“Here, in Kherson oblast, I saw that there are a large number of families found themselves in social and material difficulties,” says Alraid chairman.  “Dozens of families do not have normal house and they are not able to get out of this situation, so we will consider possible steps to help them. Of course, this is a large project that will require other donor organisations to be involved, but we are ready to cooperate in this direction with those who are really interested in solving the problems of people in need.”

According to Seyran Arifov, helping people who undergo difficulties, including social and material ones, is an important association's direction:

“When you come to such villages and see people’s realities, you cannot remain indifferent. I personally and our organisation as a whole understand our duty and our role in helping needy people.”

Let us recall that since the beginning of the year, needy families from Kyiv, Zaporizhzhia, and Dnipro have already got grocery charity sets.