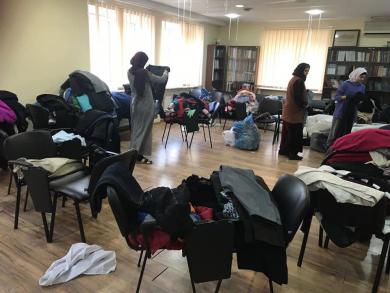 Activists from NGO Blagodiya picked up almost 200 kg of clothes for people in need, ― posted Dnipro ICC on its Facebook page.

Volunteers from Blagodiya organisation, established under the above Islamic Cultural Centre, announced via social networks that they started collecting clothes within Warm Winter relief. In a short time, they have picked up many clothes and shoes for children and adults. Local Muslims, ICC mosque-goers, were the main providers of support. The warm clothes were preferred, but people also brought other clothes, so it took a couple of days to sort them by type, for kids or adults, men or women.

Then Blagodiya activists phoned families in need to say that they could get clothes for free at the Islamic Cultural Centre.

“We have a list of the poorest families,” says Isa Shafut, Dnipro ICC head. “We keep in touch with them and do our best to provide all possible assistance on a regular basis. Almost every month we convey some support to these people. This time we have helped them with warm clothes”.

Most of the charitable aid was distributed to needy people within a few days.

“We still have some clothes,” says Isa Shafut. “We are going to deliver them to orphanages and hospices. We will contact these institutions and take the rest clothes to those in need."

Since the quarantine restrictions were implemented, the Muslims of Dnipro have been helping people suffered economic hardship, and it seems they are not about to stop.