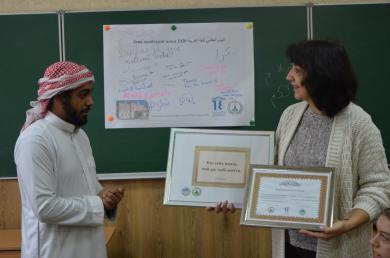 Every year at the end of December, CSUAUA Alraid’s Islamic Cultural Сentres hold events dedicated to Arabic Language Day. It always attracts the attention of those who study languages or are interested in other cultures.

This year, Kharkiv Islamic Cultural Centre celebrated Arabic Language Day together with the specialized school №87. NGO Al-Manar representatives told the pupils about the most important features of this language, comparing Arabic with Russian to facilitate their understanding. Also, the pupils learned about the words Slavic languages borrowed from Arabic.

Ahmad Bawazir, Al-Manar head, said those pupils of the 7th and 8th grades attended the event enjoyed the lectures: "The number of questions they had asked showed they were interested in learning the cultural traditions of Arab countries."

ICC activists also have run the workshops on spoken Arabic, henna painting and calligraphy. At ‘Arabic in 5 minutes’ lesson each pupil learned how to introduce himself/herself, have a small talk and name his/her favourite vegetables and fruits in Arabic. Having learned more about the calligraphy, teens were introduced to the Arabic scripts, their history, and then they even tried to write their name with Arabic letters. As usual, schoolgirls were excited about henna painting.

At the end of the event, the organizers got each other the gifts: ICC activists got a letter of gratitude from the administration of the educational institution, and, in turn, presented a painting with an Arabic proverb: "Those who teach you give you a life."