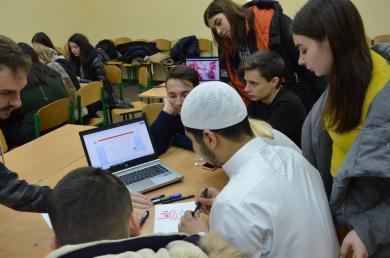 Kharkiv ICC, on their part, marked the  World Arabic Language Day on 18 December, in cooperation with their host, Department of Tourism Business of Kharkiv State Academy of Culture.

It so happened that both ICCs held their themed events for World Arabic Language Day infield. Still, both organisations managed to make their events bright and exciting. How?

In Dnipro, the themed event was held on 19 December, with the local Dnipro City Central Library kindly hosting over 70 guests.

Tariq Sarhan, a guest lecturer from Kyiv where he is Head of Introduction to Islam and Islamic Culture department at CSUAUA “Alraid”, spoke about history of the Arabic language, calligraphy and Arabic language in the Holy Qur’an. Ms.Dana and Ms.Nadia, both graduates from Dnipro ICC Sunday school of Arabic, demonstrated how well one could master the language given due diligence. ICC’s Imam Edgar Devliqamov, on his part, spoke about the School itself as well as other fields of ICC’s activities, having mentioned that it was their fifth year since their opening.

The guests reviewed a calligraphy exhibition by a talented Syrian-Turkish artist Ahmad al-Dalli, presented by a Dnipro artist Ms.Olena Zazymko. She also presented a filmed interview with the artist, commenting his tale on his pursuit for perfection is his sphere.

The guests took pictures with men from different Arab nations in their traditional clothing, and were treated with oriental sweets and Arabic coffee. Besides, everyone interested also got a card with their name or some wish (at the receiver’s request) written on it in Arabic by a calligrapher.

Kharkiv ICC, on their part, marked the  World Arabic Language Day on 18 December, in cooperation with their host, Department of Tourism Business of Kharkiv State Academy of Culture. The beginning was rather academic, with all the lectures on the history of Arabic language and writing. They even discussed the topic “Arabic language and Artificial Intellect”, offered by UNESCO. Later the event, living up to its name (Arabic Language Fest), graded into a festival.

The student’s learned basic Arabic with Ahmad Bawazir in a linguistic game “Arabic in 5 minutes” (in the end, they competed in the number of memorized words!) and learned how to do calligraphy. The ladies could decorate their hands with mehendi, while everyone enjoyed oriental sweets and some original bedouin coffee.

In the end, the participants exchanged gifts: the Department’s administration presented their guests with souvenirs and sweets, while guests from ICC presented a selection of literature for the Department.