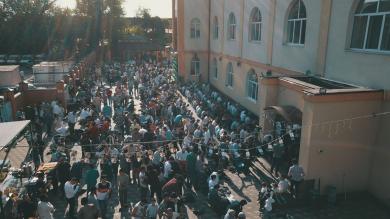 This  year’s Eid al-Fitr gathered unprecedented crowds at “Alraid” Islamic Centres, and there are several reasons. First, by the Grace of God, Sunni Muslims are unanimous in their defined Eid date this year. Second, this year’s Ramadan ended before the school year, so university students haven’t yet left their campuses for holidays, and schoolchildren weren’t yet sent to summer camps or to their grandparents’, and attended the Eid prayer along with their parents.

In Kyiv, over 4,000 people attended the festive prayer. It’s hard to give the more exact numbers, for people prayed in every corner and on every free spot, and moved closer together to make room for more believers willing to pray. Volunteers from the mosque, who had a hard time finding enough carpets or anything that could be laid on the ground for makeshift prayer sights, presume that there were up to 5,000 people. After the prayer, everyone enjoyed treats and special program; while kids, having left their Eid presents with their mothers, took hold of the bouncy castle. Noteworthy, the celebrations are to continue on the following day in Shevchenko Park, where everyone is welcome at Kyiv East Fest.

At Odesa ICC, there were over 700 people at the Eid prayer, with many youngsters. Over 200 gift packs were distributed, and those were only given to young children, not teenagers. They’re still enjoying the festivities at the moment.

Kharkiv ICC managed to host over 1,000 believers! At that, festive gift distribution among kids after the Eid prayer wasn’t the first one held since the fast ended. Yesterday, they summed up the “Good deeds hoarder box” initiative, where children placed notes with their good deeds in a special box throughout the whole Ramadan, and were awarded with gifts in the end of the Holy month. The kids were happy with their presents, while their parents were happy with their kids, for the hoarder box uncovered both naive childish deeds and more serious actions for the good of others; kids helped both their relatives and other people.

In Vinnytsia, there were so many people, that not all of them managed to pray at the same time, and some of the believers had to wait at the gates awaiting for someone to come out, so they could come in. While the kids are still playing with the animators, the adults are busy preparing for their trip to Tulchyn orphanage, where they are bringing along both animators and individual gifts for each orphan (a toy, fruit and sweets in each pack). The Muslim volunteers will also take active part in those orphan’s festive programme.

Sumy ICC also had their record today: it was the first time ever when 500 people gathered at the ICC simultaneously. Yet nobody left without performing their festive prayer, and no little Muslim was deprived of a present. The little ones also participated in a quiz.

In Zaporizhzhia, over 700 people attended the Eid prayer. There was a special Eid program held for women, while kids received presents and took part in a quiz.

Dnipro ICC hosted over 600 people who attended the Eid prayer. After the prayer, the mood was the most festive among the kids: they occupied a bouncy castle delivered specifically for that day, played with animators and enjoyed cotton candies. Still, there are more celebrations ahead, for tomorrow evening the Muslims will continue their fest at the city’s Lazar Hloba Park, with free amusement rides for the kids.