Fourth Housewarming in Kherson Region: Another Large Family Gets a House 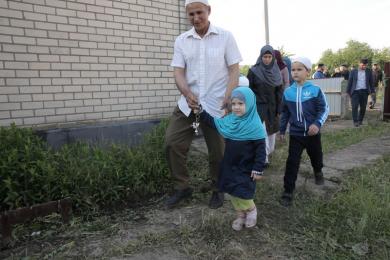 Another Crimean Tatar family from Kherson Region had a housewarming party on  International Children's Day, becoming the fourth family since Ramadan-2020 to receive a house sponsored by a joint RAMU “Umma” and CSUAUA “Alraid” fundraiser.

The Messenger of Allah, Muhammad (peace and blessings of Allah be upon him), said: “Whoever builds a mosque for the sake of Allah, Allah will build for him a house in Paradise.” Yet for Marat-ağa from Novooleksiivka this Allah’s promise started to turn into reality as early as in the earthly life. When he was younger and just returned from deportation, he worked as a volunteer on the construction site of the Novooleksiivka mosque. Unfortunately, he had no chance of building a home for himself, and had to dwell, with his wife and seven children, in a home that didn’t belong to them.

People from RAMU “Umma” and Association “Alraid” noted the large family with no place to call home when they were delivering grocery packs to needy and large Muslim families, accompanied by Novooleksiivka Imam Usein Tohlu. They decided to try and raise funds for buying a house for that family as well.

Luckily, a good house with enough room for the family was on sale near their current residence, yet it took some time to reach the owner, so the formalities lasted longer than expected. Having a housewarming party before Eid al-Fitr was impossible, so they chose International Children’s Day instead - quite a symbolic date, too, for a family with 7 kids.

While the legal procedures were carried out, the new homeowners and their neighbours wasted no time. They fixed and plated the gate, made a new fence, cleaned up the land, and re-painted the house. They also hurried to till the soil and plant the agricultural plants that were fine with such a late getting in. The considerable plot of land also has a garage and a barn, and an orchard with some developed fruit trees in it and enough space to plant some more.

Imam Usein Tohlu and his team of volunteers helped the new homeowners to complete the work as soon as possible.

At the housewarming, Deputy Mufti of RAMU “Umma” Muhammad Mamutov of Zaporizhzhia, representative of Crimean Tatar Milli Meclis Mr.Asan Aliyev, Head of Kherson Regional Chapter of Meclis Mr.Lenur Liumanov and, of course, the local imam and his team of volunteers were present.

Ahead lie the pleasant worries of moving in. Luckily, their new home is close to the family’s previous residence, so that moving personal belongings is easier.