Ramadan Wonder: Two Needy Families Given Their Own Homes! 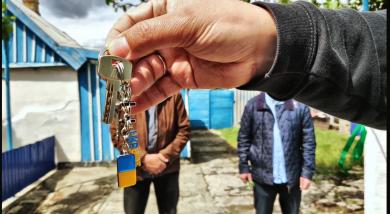 What started for two Muslim families of Partyzany village (Kherson region) as another Ramadan in extreme poverty, ended with a dream come true: unindifferent adherents raised funds and bought them their very own homes in that very village!

Hamza Issa and Muhammad Mamutov, representatives of RAMU “Umma” and Association “Alraid” first drew the attention to dire living conditions of those families as early as during stage 1 of delivering food packs to the needy Muslims of Kherson Region. Instantly they try to find opportunities to resolve the problems of these families.

The first family consisting of parents and their seven children was cooped up in a tiny damp half dugout, with two-tier beds occupying almost all the inner space. See it for yourself by watching a short video report: cramped rooms with low ceilings, not to mention lack of any comfort and coziness. So the guests from Zaporizhzhia put their heads together and decided to see if the village had some decent houses for sale. Having studied the offers, they started raising funds, and only when they were sure that their plan was going to work out, they contacted the family and brought them along to see the proposed houses, so that they could choose the one that fit them best.

After the choice was made, all they had to do is to settle down formalities and then help move the scarce possessions of the family still overwhelmed by an unexpected turn of fortune to their new home. According to Zaporizhzhia imam Muhammad Mamutov, one should have seen the faces of children when they first entered their new home: it was obvious that it seemed almost like a palace to them.

Besides, another pleasant surprise was awaiting the kids: the good-doers bought new wonderful toys for all of them as a housewarming gift!

They moved on 22 May, so the family celebrated Eid al-Fitr in much better living conditions when the ones they began fasting in.

The second family consists of a single mother, who raises her four children and also takes care of her own elderly mom. The six of them kenneled in a tiny dilapidated house they rent, for they had none on their own. Extreme poverty didn’t give them any chance to allow renting (not to mention buying!) something better.

So the proposal to come along and choose their very own house from the list of options to be bought with funds raised by good doers came to the family’s total astonishment. The home they chose not far from their rented one needed some effort to do up (such as cleaning and repainting walls), and the garden needed some maintenance, too, but the family never hesitated to get to work. Besides, volunteers from Novooleksiivka mosque offered them a hand, so the job was done really fast.

After the formalities were taken care of, and both the house and the yard stood neat and tidy, the happy family moved into their very own home on 23 May, the last day of Ramadan. Please follow the link to watch a short video report.

But that wasn’t the end of pleasant surprises for them on that day: the volunteers took them to a local market where they could choose themselves brand new clothes, plus toys for the kids, — with all costs covered by the volunteers.

We congratulate the new homeowners upon their housewarming, and ask God to reward everyone who invested their effort and donations in making those Ramadan wonders come true, both in this world and Hereafter, and build a house in Paradise for each one of them.