Charity Department of SO “Maryam” Visit an Orphanage in Pryluky 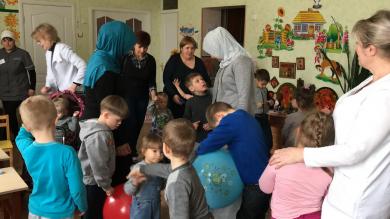 Most pupils of the institution weren’t abandoned by their parents, but either has a diagnosis that require special teaching approach (infantile cerebral paralysis, autism, Down syndrome; with parents taking them home on weekends and holidays) or have their parents’ parental rights terminated. Such a division between those who can go home and those who always stay at the boarding school becomes even more distinctive on holidays, so the volunteers wanted to cheer up a bit those 32 kids (of overall 65 pupils) who had to stay.

The idea to bring fruit and sweets was dismissed by the Boarding School’s administration, for many of their pupils were on a special diet. What was always in demand, they said, were learning games and educational toys, meant to promote fine motor dexterity, creativity and logic. All that was sponsored by one of the Kyiv ICC parishioners (the man preferred to remain anonymous). They also brought a limited number of sweets for those whose diet allowed such treats.

The guests spent some time with kids who had their communication skills developed enough, and entertained a bored girl from isolation ward who had had a seizure earlier that day and thus couldn’t be with other kids.

As the visiting time was right after lunch, the volunteers decided to make do without animators so the kids wouldn’t get too agitated before their midday nap. Besides, there had been a number of fests before the holidays, so the kids doubtedly had the lack of playing with animators.

Noteworthy,  it was the volunteers’ second visit to the facility, the first one took place in early 2019. Their contact was established when SO “Maryam” found themselves in possession of quite a lot of brand new clothes and footwear for kids aged 4-12, as well as office supplies donated  to them, so they started a research of children’s facilities that might need such things. After some research on the internet and some more negotiation on the phone, the first visit took place. They initially planned their second visit for autumn, but their tight schedule prevented them from coming, so the volunteers arranged the meeting at year’s end.