“I respect your faith”: Visiting Hospice in Skybyn 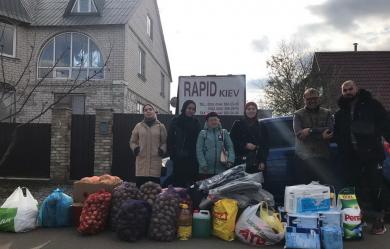 The Muslims, as usual, brought along some groceries (4 bags of potatoes, 2 bags of onions, one bag of cabbages and carrots each, 5l of sunflower oil, as well as wholegrain cereals and flour), cleaning products (10 kg of washing powder and 5L of liquid soap), personal care products (in particular, adult-size diapers for bed-ridden patients) and bed linen (there’s lack of bed linen in the Hospice, moreover,  five of the patients are bedridden).

Some of the volunteers had already been to the hospice before, and the patients recognized them and were happy to see them again. They had no problem with difference in religious views:

— You know, I respect your faith, for you carefully follow its rulings, and it’s so beautiful! I wish you all the best!

The previous visit had been paid to the Hospice’s patients in May 2019, and now, a few days after the last visit, the volunteers are already planning the following one.

According to Mr.Oleh Horbachov, Head of the Hospice, legally, they have some relatives on the government-controlled territories, and thus receive no government support. Actually, those relatives are hardly ever seen, unless at funerals — as a rule, that’s the only time the hospice workers do see them.

The facility is itself a sort of test for one’s situation: it is open for everyone, but only those in severe need stay longer than a week or two, for that time is enough so that the modest living conditions scare away any freebie lover. As of today, the hospice is donations-subsidized, and they rent both the building and the land — so finding an investor who’d help them buy the property is a high priority. Most of the donations are spent on food and utilities.