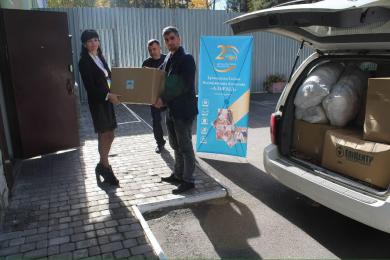 More than 150 foreigners and stateless persons in the Temporary Stay Center of the State Migration Service in Volyn Oblast recently received an aid from Ukrainian Muslims.

Clothing and footwear, sanitation and cleaning materials, detergents and disinfectants, sports equipment, kitchen utensils and much more - all these things were collected or purchased at the expense of Muslims, namely the Muhammad Asad ICC of Lviv in response to a letter asking for help, that was addressed to the head of the All-Ukrainian Association "Alraid" Seyran Arifov.

The director of the Volyn Accommodation Centre for Migrants, who are illegally staying in Ukraine, asked to give a hand to the persons being kept in this State Migration Service establishment. Without undue red tape, Muslims raised funds and things for more than 150 people.

State Migration Service asked for a help not for the first time because after changes in legislation - the period of stay in such centers have been extended to one and a half years – therefore the institution faced the problem of maintaining foreigners and stateless persons in proper conditions.

According to Amin AlKasem, the head of Lviv ICC, Lviv Muslims were the first who responded to the State Migration Service request for assistance in raising the funds and collecting the necessary things for the residents of the Centre. The parishioners of the Lviv mosque brought not only the things included in the list, but also have seen to it that those detained could satisfy spiritual and intellectual needs. Religious literature and fiction in Arabic and English were transferred to Zhuravichi village of Kivertsi raion in Volyn Oblast, where this Centre is located.

- In this establishment, there are mostly illegal migrants from Asia, Africa, countries of the Muslim world, who forced to seek a better life abroad due to problems at home. Some of them tried to stay in Ukraine, most sought to get to Western Europe. Yes, they are lawbreakers, many of them will be deported, but we are not judges to assess their deeds. These people are in trouble, need a help, and who else, but Muslims, whose religion calls for mercy, must respond - and they respond indeed with effective support, - says Amin AlKasem.

Seyran Aryfov, chairman of "Alraid", expressed the same opinion stressing that those people had a reason for their migration to the foreign land - they escaped the war and terrible ordeals often were unable to legally get Ukraine or other European countries. Desperate people had to look for anyways. For many of them, this was literally a matter of life and death ...

- However, our concern is to help those who need it. And it is not only because many of those unfortunate, who are awaiting deportation or decisions over their future fate in the Accommodation Centre for Migrants, are followers of Islam. People, practicing other religions, are also living there. But every Muslim remembers the words of the Holy Quran: “Zakah expenditures are only for the poor and for the needy and for those employed to collect [zakah] and for bringing hearts together [for Islam] and for freeing captives [or slaves] and for those in debt and for the cause of Allah and for the [stranded] traveler - an obligation [imposed] by Allah . And Allah is Knowing and Wise.”(9:60),- reminded Seyran Aryfov.