Sunflower on the Chest: Activists of SO “Maryam” and “Ukrainian Muslimahs League” at Mother’s Day Celebrations 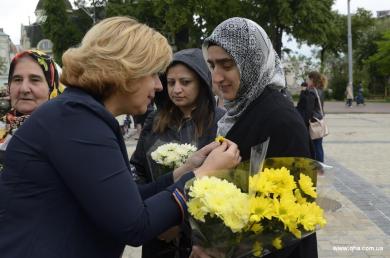 Activists of Women’s Organisation “Maryam” and Ukrainian Muslimahs League took part in the celebration of the Mother’s Day (celebrated in Ukraine each second Sunday of May, which was 13 May this year). On that occasion, women from all over Ukraine and even women’s delegations from Turkey, Syria and Bosnia and Herzegovina gathered at Mykhailivska Square in Kyiv.

Ukrainian Muslimahs spoke to mothers and wives of the fallen defenders of Ukraine, and the foreign guests told how much pain and suffering caused the wars in their home countries. Each of the participants had a sunflower brooch on their chest.

The mothers marched from Mykhailivska Square along some of the central city streets, and ended up at the Hall of Columns at Kyiv City State Administration, where the first International Mothers Assembly took place. The list of delegates included the participants of the Dignity Revolution, Combat veterans, mothers and wives of the fallen soldiers, mothers of large families, mothers of children with oncology and other dangerous diseases. They gathered together in order to draw the public attention to problems and needs of the women currently deprived of any of the State support.

During the celebration, 250 women who lost their sons to the war in Donbas received their Order of Veteran’s Mother.

600 delegates adopted a Resolution that is to be sent to the President, the Prime-Minister, and th Speaker of the Verkhovna Rada.