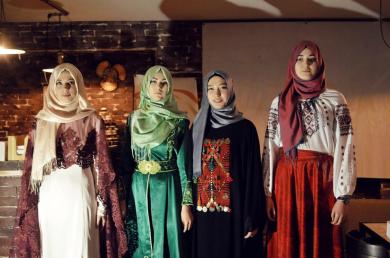 As promised, Zaporizhzhia Muslimahs held all three events dedicated to World Hijab Day: at Suzirya Cultural Centre on 1 February, and another two on the following weekend, for people who couldn’t attend amids the business week: at Dyryzhabl` Anticafe and at Islamic Cultural Centre Vira.

Every event began with introduction of criterias of hijab and clothing that fulfill that criteria. They also dispelled myths and stereotypes on Muslim women’s clothing. In order to illustrate those stereotypes, they presented a video footage of a polling survey they’d filmed a day earlier by approaching random citizens in Zaporizhzhia streets and asking them questions about Muslim women’s headdress: what passers by knew about it and what they thought about hijab-clad women.

A review of Muslimah-oriented fashion designers was a powerful blow on stereotypes, for it became obvious that one could be stylish while remaining modest. It wasn’t only words and pictures, for after the presentation, a real fashion show took place, where modest fashion was modeled by both Muslims and non-Muslims who volunteered to help.

The guests learned what the traditional Crimean Tatars clothing looked like in old times and how they reconstructed and recovered it all, detail by detail, after the people managed to return from the Deportation. And, of course, the lecturers never failed to mention traditional Ukrainian clothing, for women’s headwear always had a very special and sacred meaning in the Ukrainian culture. Here, the Muslims were supported by Ms.Svitlana Maliukova, a member of Cossack Folk Singing and Dancing Academic Ensemble OKSAMYT, and by Ms.Larysa Kupchynska, the Ensemble's Art Director. Both women joined the events to tell about how Ukrainian headscarves and kerchiefs were styled, and also about the wedding tradition of covering the bride’s head and hair.

At the first two events, every guest received a personal number, and later received a  headscarf by the procedure of random draw. On the third event, one had to go through a quiz in order to win a present.

Tea, coffee and goodies were the tasty part of all three events, while the bookworms could look through a themed stand with literature on women’s headdress in different cultures.

Volunteers who helped organize the events also got memorabilias, namely cups and notebooks  bearing the illustration, created by a talented designer Inna Aras specially for that occasion. The same picture, only human-size, was available in the photo-zone, so everyone could try on the look. And, of course, everyone interested in trying a headscarf on, volunteered to model at a master-class, so the joint photoshots were bright and flamboyant.