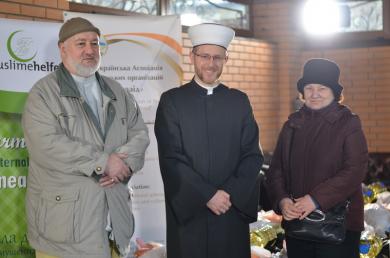 A benefit on providing the internally displaced Crimean Tatars with grocery baskets and warm winter bed sets, initiated by a German Fund “Muslime Helfen” with their Ukrainian Partners, the AUASO “Alraid” and RAMU “Umma”, was launched last weekend.

At Kyiv ICC, the Crimean Tatars who were forced to leave the peninsula after it was occupied by Russia received 24 grocery baskets with all the necessities (5l of oil, 10kg of flour, 10kg of buckwheat, 5 kg of sugar, 5kg of rice, 5kg of onions, 0.5 kg of dried apricot, 3 kg of apples, 3 kg of mandarins, 3 kg of cookies and 0.5 kg of tea) and 26 warm winter bed sets (each containing a pillow, a warm blanket, and a set of linen) on Saturday, February 13.

Another 50 sets and 43 grocery baskets were distributed at Vinnytsya ICC and in Nova Hreblya town (where 30 resettled Crimean Tatar families live) on Sunday, February 14.

Cooperation between AUASO “Alraid” and “Muslime Helfen” began in the end of 2015, when a famous Muslim public figure Ahmad von Denffer attended Kyiv ICC. Only a few knew that, except the obvious presentation of AUASO “Alraid”s illustrated edition “Islam for Children”, the guest from Germany had a much more important mission from his fellow German Muslims, which was finding a reliable partner for providing aid for the Crimean Tatars who were forced to leave the occupied peninsula. He found such partners in AUASO “Alraid” and RAMU “Umma”, and so the benefit began.

Similar events are to be held in other regions of the country, where internally displaced people from Crimea have settlements: in Lviv, Zaporizhzhya, Dnipropetrovsk and Kharkiv, where another 200 sets are to be distributed.