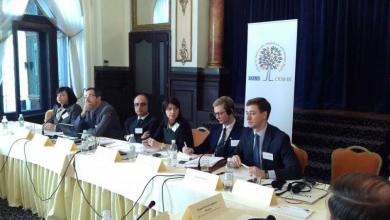 Imam of Odessa Islamic Cultural Centre Mr.Bilal Hamze and Head of AUASO “Alraid” PR-department Mr.Oleh Guzik took part in Roundtable in Odessa on “The Role of Dialogue in Enhancing the Security of Religious and Belief Communities” on november 3.

The participants not only listened to lecturers from all over the world, but were actively involved themselves in discussing various topics, such as definition of the dialogue, its goals and forms; entities promoting continuous, transparent, open and comprehensive dialogue in the OSCE zone; and how dialogue can increase security of religious organisations and communities.

It bears reminding that Muslims are actively involved in OSCE educational programmes. For instance, Mr.Yevhen Hlushchenko, Imam at Kharkiv Islamic Cultural Centre mosque and Deputy Head of RAMU “Umma”, was one of the participants of a two-day seminar held on October  19—20 in Kharkiv.