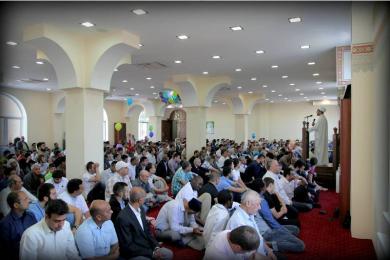 Muslims are blessed with God’s special Mercy this year, as it seems that all the followers of Prophet Muhammad, peace and blessings be upon him, not only started fasting on the same day all over the world, but are celebrating Eid on the same day as well, on this blessed Friday.

Thousands of believers headed for mosques and prayer rooms all over Ukraine on the festive day of Eid-al-Fitr in order to perform the festive prayer together and mark the termination of the Holy month of Ramadan. Several thousand believers attended “Alraid” Islamic Cultural Centres. As the buildings couldn’t accommodate everyone willing, the believers often prayed on the carpets outside as well, in the yard of either Islamic Centre or Religious Organisation.

Joy of this blessed day, however, was strongly mixed with sorrow, as on the very same day the first anniversary of MH17 tragedy was marked. It was a year ago when terrorists downed a commercial flight MH17 which resulted in death of 298 people, both passengers and the crew. Ukrainian Muslims didn’t fail to mention victims of that barbarous attack in their prayers, asking God Almighty to rest them in peace and heal the hearts of their close ones.

More than 2,500 persons came to Kyiv Islamic Cultural Centre for the prayer. While the adults enjoyed treats and congratulations after the prayer, their children duly appreciated the bouncy castle, cotton candies, balloons and presents they received from “An-Noor” Children’s Club according to their age and preferences.

The children also performed a mini-concert where they shared their own perception of Ramadan through funny rhymes.

All the guests of the feast, mostly adults, enjoyed tasty pilaw and, of course, the sweets — those were much more the items of the children’s interest.

Muslims of Vinnytsya decided to not only make the day for their little adherents, but also teach them a lesson of kindness and mercy. For that reason, they arranged a visit to local oncological hospital children’s department in order to relieve their everyday hospital life by making new friends and giving them presents.

Medical staff asked to plan their visit for the afternoon, as it was the morning when little patients were getting their medical treatment; so the visit was scheduled on 5 PM.

About 250 persons came for the festive prayer to Vinnytsya Islamic Cultural Centre, and were invited for tea and sweets afterwards.

About one hundred visitors gathered at Lviv’s new Islamic Cultural Centre on this day. There were special Non-Muslims guests who came to congratulate their Muslim friends as well. For instance, Mr.Taras Dzyubans’kii, Deputy Mayor For Religious Matters and Director of Centre for interconfessional and interreligious dialogue “Libertas”, came. He congratulated Lviv Muslims upon the completion of their fasting and wished them persistance and will to preserve the spiritual growth they reached during Ramadan during the rest of the year as well. Besides, priests of Greek Catholic Church situated on the very same street sent their congratulations to their Muslim neighbours.

Everyone were invited for tea and sweets, and the little Muslims also participated in different contests and received presents.

Festive programme in Odessa began half an hour after the prayer and the preaching was over. They at the ICC prepared treatment for more than 700 men and women. A separate programme for children was planned, with treats, sport games, bouncy castle, a soap bubble show, cotton candies, balloons and presents.

All that enriched the little Muslims with happy memories and impressions, so they later went for Friday prayer in their most joyful mood.

Almost 400 believers came for the festive prayer at Zaporizhzhya ICC. Besides coherents and Islamic religious figures, Director of Zaporizhzhya Municipal Culture, Turism and Religions Department Mr.Vladyslav Moroco and his deputy Mr.Pavlo Myalo came to congratulate Muslims upon this occasion.

After the prayer and congratulations, everyone was invited to join a sweet buffet in the Centre’s yard. All the kids were presented with sweets and toys, and those of them who were most persistent in learning the Qur’an during Ramadan were given opportunity to show their knowledge and reciting skills in a quizz, as part of the questions was about the Holy Book.

More than 500 parishioners gathered at Kharkiv ICC mosque in order to celebrate the day. After the prayer, a children’s festive programme began, where every little Muslim received presents, sweets and balloons.

All the guests were invited for tea, coffee and sweets.

Islamic Cultural Centre in Dnipropetrovsk isn’t officially open yet, as it’s still under reconstruction. This, however, didn’t prevent about 300 persons to come there for the festive prayer. Each child was presented with a toy and some sweets.

A small room of local religious community “Islamic Cultural Centre”, unfortunately, didn’t allow enough space to make a big celebration with contests and amusement, as its capacity was hardly enough even to accommodate 150 praying men.