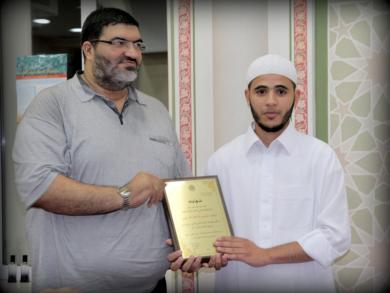 Muattasim Billah Muhammad Ureibee has been very productive over this Ramadan: he continues his education, takes care for his family, volunteers at Kyiv Islamic Cultural Centre mosque (he’s one of the kitchen team cooking iftars for all the parishioners). And now he’s completed his recitation of the Holy Book for his Kaloon from Navee Madani degree, having become the first participant of the “An-Noor” Circle who received a respective certificate.

The event of July 6 itself, with all the parishioners present, began with Mr.Ureibee’s recitation of her final Surahs under the supervision of Staikh Haydar Al-Hajj. Now, having received a certificate, he can teach this style of recitation himself after he passes his tajweed exam.

It bears reminding that  Shaikh Haydar Al-Hajj was a teacher at the Higher Medrese of Hafidh in Crimea forced to leave the peninsula after Russian occupation and move to Kyiv. Three of his students, namely Ms.Samia Arada, Ms.Vira Fryndak and Ms.Najah Sweidan completed their hafs Bin Asim degree under his supervision. Mr.Muattasim Ureibee, a student from Libya, became the first man to complete the whole Qur’an in Kyiv under the Shaikh’s guidance.