People Better Love God And Pray To Him In Different Languages And Traditions, Than Be Unanimous In Scorning Him In One Language 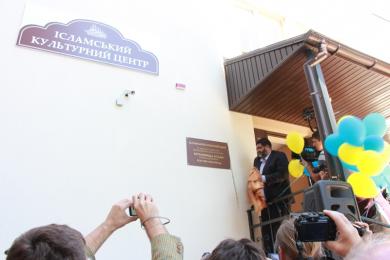 Today’s opening of Lviv Islamic Cultural Centre was indeed an outstanding event. Not only followers of Prophet Muhammad came, but people of other religions also came to share this moment of joy, both from Lviv and other regions of Ukraine. Almost two hundred people gathered in the yard of the centre, and non-Muslims were about the half of them, which was notable. AUASO “Alraid” Headquarters sent Mr.Bassil Mareei, Head of Association, and his deputy Mr.Seyran Arifov as representatives from Kyiv. Local authorities were represented by Mr.Taras Dzyubans’kii, Deputy Mayor For Religious Matters, who congratulated the Muslims with a quotation of late John Paul II “Faith and culture are complementary; true culture always comes with faith, and true faith always increases one’s culture. Faith without culture is empty”. Mr.Yuri Pidlisnii, the Deputy Head, congratulated the Muslim community on behalf of Regional Administration.

The event caused vivid interest among filming groups of the four local tv-channels and numerous photographers. In the course of agenda were solemn opening of the Centre, solemn opening of a commemorative plaque of Muhammad Asad, excursion over the Centre, presentation of the second edition of Ukrainian translation of the meaning of the Holy Qur’an, and an official buffet. Muslim guests had another action point, though: a joint Friday prayer preceded by a preaching on importance of the mosques. The event started with recitation of the Holy Qur’an and joint singing of the Ukrainian anthem.

Shaikh Said Ismagilov said in his complimentary speech that they named the ICC after Muhammad Asad in order to memorialize the name of that prominent Muslim public and religious figure. Muhammad Asad (name at birth — Leopold Weiss) is known in many countries, and there’s a Square named after him near the UN Headquarters in Vienna, Austria. At the same time, unfortunately, hardly anyone knows about him in the city where he was born and raised. UAUASO “Alraid” and RAMU “Umma” decided to repair that historical injustice.

Christian clergymen arrived as well, including representatives of Ukrainian Greek Catholic Church and different Protestant denominations. they noted that having Islamic Cultural Centre on the same street with several Christian centres was a great opportunity to unite in raising the standards of living and spirituality is that part of the city, not very popular among other citizens, and give it a new push towards prosperity.

The facilitators also read aloud the letter from Mr.Mustafa Dzhmilev, Crimean Tatar People’s Affairs Commissioner for the President of Ukraine, and Mr.Refat Chubarov, Head of Crimean tatar Mejlis. They thanked the people of Lviv for their hospitality towards the Crimean Tatars after they had to flee the Russia-occupied Crimea, and expressed their hope for the soonest chance for the Crimean Tatars to pay back with equal hospitality on their Fatherland.