A Small Feast for Refugees in Odessa Region 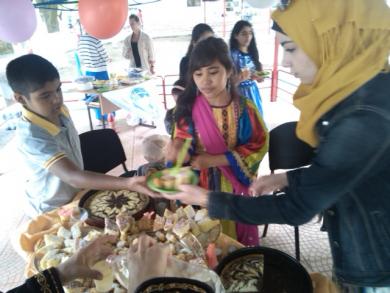 They made a real feast both for adults and kids

Inhabitants of the Odessa Region Refugees Temporary Detention Centre weren’t abandoned on June 20, which is celebrated as the World Refugee Day.

Volunteers from the Social Organisation “Al-Masar” headed by Mr. Hamze Bilal and Ghazi Mustafa, unfortunately, cannot  solve their problems in global — but they never miss an opportunity to prived the refugees with their help and support as much as they can. They made a real feast both for adults and kids this time: with hot pilaf cooked by the young men from local Afghan community at a chow wagon, Arabic sweets cooked by the “Al-Masar” female activists, mehendi for everyone willing and concert by the activists’ kids. The occasion is rather sad, of course — but on the other hand it’s important that the refugees didn’t feel abandoned on this day.

According to the latest data, about 20 million people at our planet are refugees today. Most of them are from Africa, Afghanistan and at the Balkans. World Refugee Day is meant to draw the attention of the mankind to people whose fate no one is proofed against, and, unfortunately, this year people of Donbass experienced the same grief of losing their relatives, their homes, their safety and their property. We’re lucky that such crisis didn’t involve the whole territory of our country, so our compatriots aren’t forced to leave Ukraine in their attempts to save themselves, and be rightless abroad. Their kids get the most exquisite compassion, as they are forced to think of adult problems at this very young age when games outside and marks at school should be the matters of their biggest concern.