Youth Conference In Istanbul: “Learn How To live Side By Side And Remain Humans Despite The Conflicts” 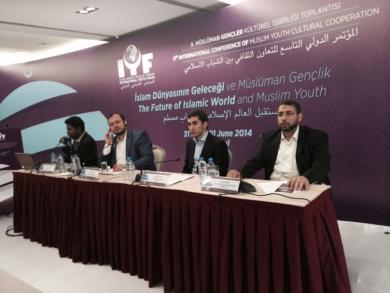 Youth Conference In Istanbul: “Learn How To live Side By Side And Remain Humans Despite The Conflicts”

IX International Conference on Cultural Cooperation  in Istanbul was held on May 31 — June 2. “Future of Islamic World and Muslim Youth” was the motto of the event, facilitated by the IYF (International Youth Forum) and IIFSO (International Islamic Federation of Student Organisations). Mr.Ismail Qady, Deputy Head of the AUASO “Alraid”, joined his colleagues from other European, Asian and Middle Eastern Countries as a special guest from Ukraine.

Mr.Qady, appealing to participants from more than 50 countries of the world, stressed the importance of maintaining dialogue between young people of different confessions and cultures, which was confirmed by the latest events in Ukraine. “Only our eagerness to help each other can explain the fact that the tense situation in the country didn’t split its citizens for their different religions — on the contrary, it made us unite more than ever. People learned each other better and try to have a better insight in each other’s problems. It’s very important that the Muslim Youth was raised on this ideals. as the conflicts will be over, and we’ll have to go on and look each other in the eyes.”

Mr. Muhammad Budak, the IYF representative, spoke about the importance of communication and experience exchange between young people from the different countries as the guarantee of progress for the mankind. He expressed hope that the Forum will remain a place gathering youth from different countries, where they can discuss topical issues, for many years, as it’s the youth he relies on in his hopes for the mankind’s better future and establishing a fairer societies, peace and development for our planet.