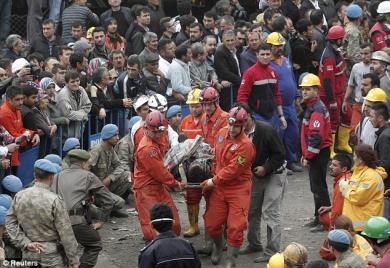 A horrible tragedy stroke our neighbouring country. A grieving crowd of relatives and friends gathered outside a coal mine in Soma, Turkey, on Wednesday, still hoping for finding survivors inside the burning complex of tunnels. We, the Ukrainian Muslims, grieve with our Turkish brothers and sisters in faith, as we unluckily happen to know their pain very well. Many Ukrainian families lost their men in rock falls, mine fires and mine explosions, and we are very distressed to learn that so many people of Turkey are being through the same grief at the moment.

All-Ukrainian Association of Social Organisations “Alraid” on behalf of Ukrainian Muslims brings its sincere condolences both to those injured in the incident and those who lost their dearest ones there.

At least 238 people were known dead and as many as 120 trapped inside the burning mine. Efforts to save them were being complicated by the fire, which began Tuesday after a transformer blew up during a shift change. Managers believe 787 people were inside the mine at the time. Police and rescue workers were everywhere since the tragedy occurred, but there was precious little for them to do.

Rescuers struggled to reach more than 100 miners trapped, some survivors crawled out of the burning mine on their own. This incident is likely to be the country's deadliest mining disaster ever: a mining accident in the 1990s took 260 lives, and this one has the potential to top it.

Everything belongs to Allah, and to him is our return. We beg God Almighty that the rest of the people remaining in the mine will be found alive, and that those who died in this catastrophe were forgiven by Him and led to His Paradise, and that those injured and those who lost their dearest ones will recover soon from their wounds, both physical and spiritual. God bless you, our brothers and sister! Your pain is our pain, and we are very sorry there’s nothing we can do for you but make dua’s.