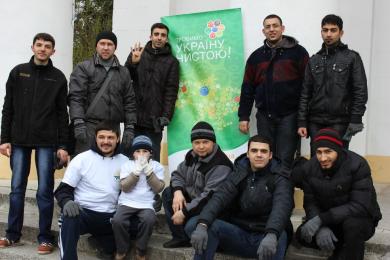 An Ecology initiative “Let’s Make Ukraine Clean! — 2014” was held all through the country on April 12. Volunteers of large cities and small towns gathered together, as they believe that one can improve life even with small deeds, literary with their own hands. Work-for-the-nation day did take place despite the cold and cloudy weather which froze enthusiasm and thinned the number of volunteers.

Ukrainian Muslims, of course, did not stand aside of such a wonderful initiative and joined it. Many Islamic Cultural Centres held such events earlier on their own and did voluntary cleanups of the nearest recreational areas. They eagerly joined the all-Ukrainian fleshmob this year in order to clean parks, squares, banks and other recreational places along with other people of our country.

It appeared that even a little group of people can do a lot without special machines. In Kyiv 11 participants from the “An-Noor” Social Organisation returned primeval appearance to 20 Ares of the city Exhibition of Economic Achievements. They collected 25 full 200 l garbage plastic bag of litter.

Politicians with thick fingers didn’t prevent the Crimean people from joining this ecological initiative on the occupied territory. More than 3 dozens of young people from the social organisation “Emel” and among the students of Tavric National University came to Simferopol water-collecting area on April 12 in order to leave it clean. Their input, however, is not limited to that: they did cleanups at the territories of mosques and at Muslim cemeteries earlier this spring.

In Zaporizhzhya activists of the local ICC received a very difficult task near the bus station: local river bridge and a piece of bank near it. Cold weather became a real tryout for some participants of this ecological event — for instance, two girls from the sunny Morocco — but no one quit their work until the last plastic bottle was collected and packed. A little area under the bridge gave a huge amount of work, with 60 bags of litter collected… The  “Let’s Make Ukraine Clean!” Project Coordinator and other participants appreciated the work done by the Muslims.

In Kharkiv 16 volunteers from “Al-Manar” Social Organisation cleaned the area at the spring-well, the people’s beloved place to rest. This didn’t remain unnoticed^ many passers-by stopped to thank the volunteers for their work, and promised to join the event next year.  Some asked the young people, why they were doing that and if they were paid for it. The coordinator replied, that the Muslims, as other Ukrainians, couldn’t stand aside the ecological problems of their cities.