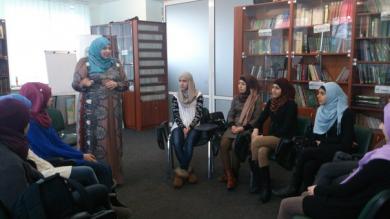 Funfair mirrors are remarkable for a different picture every spectator sees in them, depending on the angle they chose. You can, of course, choose the position where your reflection absolutely fulfills your tastes and expectations. Such self-deceit makes a person stand still at a certain position in front of the mirror, not daring to move, so that the illusion won’t fade away. Psychologist Ms. Tanzilya Isa held a training at Kharkiv Islamic Cultural Centre, where she proposed the teenagers to see their role in social groups “as is”. A range of exercises played the role of an usual mirror, giving an opportunity to see the real reflection of one’s social self.

Prepubescent years play a defining role in forming a personality. A former child tries the society for its willingness to adjust to his demands, and tries to rebel when he finds no such willingness. Tanzilya proposed the teenagers to learn how to establish relations with others and take hold of one’s negative emotions by taking part in the role play games developed by the psychologists.

Lack of team integration and understanding became obvious from the very beginning: each of the girls wanted the leader’s role.  Changes came step by step. During the training the young ladies learned how to take hold of their inner fears and conflicts; learned how to listen to others. The trainer put them in situations where urgent reaction was necessary, which taught the participants to draw back from their problems and seek for the most effective decisions.

“If I Can’t Eat Something, I’ll At Least Bite It”

Positive effect wasn’t long in coming; cooperation within the team got better and mutual understanding strengthened. One of the tasks, for instance, was about defining “what I forbid the others to do but at the same time do it myself?” Such self-analysis led the girls to understanding that every time we limit others, we take the free space from them, mostly filling it with nothing on our own.

Young ladies seemed to see their real reflection in a usual mirror for the first time. They learned how to acknowledge their negative thoughts and actions ac such, to empathize and support each other.

“That's Where The Shoe Pinches!”

This training helped each of the participants to see things in more realistic light, find the best tactics for achieving high results and puzzle out the brand new world of adults, part of which they are to become soon.

The girls learned themselves better, namely their strengths and weaknesses, by getting their “inner funfair mirrors” out of the way, and got a better understanding of how the others see them; of sources of conflicts and hardships. They were able to stick together and do productive teamwork which is very important,as only a close-knit team can effectively define task priorities, set clear goals and successfully achieve them.