The Youth Voted For Nikah 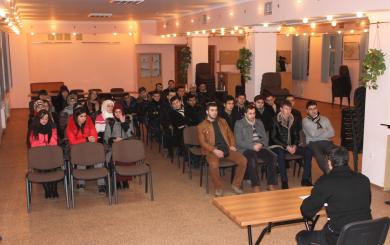 The Youth Voted For Nikah

About 50 young people took part in the seminar on peculiarities of nikah and premarital relations in Islam. It was the social organisation “Emel” who facilitated this event at the Crimean Islamic Cultural Centre.

“We wanted to hold a seminar, and we used social network to find out which topic is the most interesting for our youth. And the youth voted for nikah, so we see this is a topical issue for them,” — said Mr. Muslim Dervishev, the Head of “Emel”.

They invited Shaikh Saitqadr Ibrahimov for a qualified consultation on the peculiarities of creating the family within Islamic tradition. It took more than two hours for the Shaikh to describe the rules regulating relations between young men and women before marriage, and also in Shariah marital regulations, answering numerous questions.

There was plenty, as the ballot allowed the facilitators to gather targeted audience.

“Me, personally, really enjoyed the event,” — one of the participants, Ibraim Umerov, said. — “The seminar was interesting and useful, and I think I’ll come next time whatever the topic is.”

The topic, however, is yet a mystery for the facilitators themselves: “We are very likely to hold another questionnaire among the young people to reveal the topics-on-demand,” — Mr. Dervishev said. — “We are happy that young Crimean tatar of both sexes are show their interest in Islam. The “Emel” team is always willing to help the youth know their religion,roots and culture better”