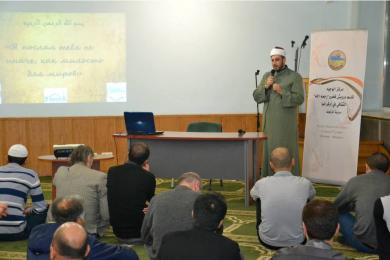 Kharkiv Muslims arranged an edifying meeting confined to the month of the Last Messenger’s, peace and blessings be upon him, birth.

Prophet Muhammad, peace and blessings be upon him, has definitely played a prominent role in the world's history.  His action as a political and religious leader, warlord, judge remain a timeless example for anyone having power over other people — over one’s family, team, not to speak of the population of the entire city, region or country. His solutions for  everyday problems can be a good example not only for every believer, but for any person willing to achieve higher morals.

People of different ethnicities gathered to listen to the lecture on the importance of following Priphet Muhammad and his high morals. Heads and representatives of ethnic communities, namely Afghan, Tajik, Uzbek and Turkish, stressed the importance of every mosque not only as a place to pray, but as the centre of public life under Prophet’s (peace and blessings be upon him) rula, and called upon everybody to maintain this practice.