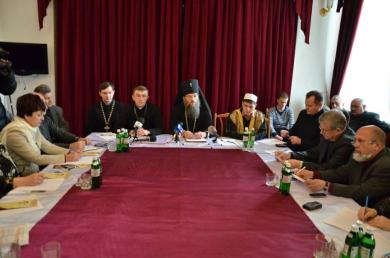 More than 30 representatives of different religious and ethnic groups gathered at a roundtable “Ukraine Is Our Common Home” held in the city of Zaporizhzhya on March 4. They all expressed their deepest concern about current situation in the country forced from abroad, and also the matter of Crimea. Muslims were represented by Mr. Muhammad Mamutov, the Zaporizhzhya Islamic Cultural Centre Imam.

Priests and heads of diaspores (namely Tatar, Polish, Belarus, Bulgarian, German, Greek, Georgian, Ossetian and Jewish) drew up an appeal to all inhabitants of Zaporizhzhya region, asking everybody not to cast a bone between Ukrainians, as we all are a unanimous nation, regardless our different ethnic roots. “We all are citizens of Ukraine, and we must not divide basing on ethnicity or religion. Love and concern for the future of our common Home unite us.”

Religious and public figures are confident that we can overcome the crisis only together, having joined our efforts in fighting injustice and lies, first of all in our own attitudes, and asking God Almighty to guide us straight.