Believers Of All Confessions, Unite! 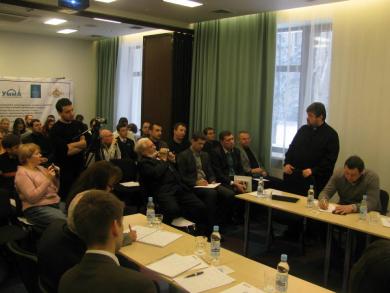 Believers Of All Confessions, Unite!

Believers in Donetsk decided to mark the World Interfaith Harmony Week literally. On February 6 a roundtable was held, where representatives of authorities met various religious and social organisations. The event was initiated and facilitated by the Centre For Religious Studies And International Spiritual Relations, AUASO “Alraid”, Donetsk Social Organisation “Centre Developing And Harmonizing A Person “Vostok” (“East”) and “Ethnographical Complex Donbass”. Representatives of 22 region’s confessions expressed their interest and joined the roundtable.

A spiritual tutoring and developing tolerance was in dispute as well as the role of education in developing a multidimensional person, the social dialogue, communication and cooperation in the name of building peaceful and prosperous future.

Believers Of All Confessions Have Much In Common

Mufti of RAMU “Umma” Mr. Said Ismagilov stressed that believers of different confessions have much in common, namely similar moral values, community service, willingness to stand against the degradation which revealed itself in the most exquisite manner due to the latest events in the country.

The session resulted in the joint decision to work on the projects of joint events in the sphere of Ecology (cleaning streets and parks, planting flowers and trees), Education (both spiritual and social) and Charity.

The participants unanimously supported the idea of reactivating the Donbass Council of Churches and Religious Organisations where representatives of local authorities, Media, social and Human Rights organisation will be appointed as well as religious organisations of the region. This will provide a higher view of the Council’s work.