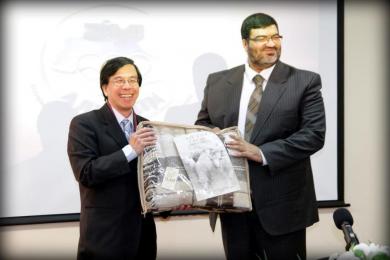 When opening the event, Mr. Theong Ban Chuah said that the Ambassadors of Malaysia, Indonesia, Pakistan,  India, Vietnam and Japan facilitated this festival in order to introduce the Asian culture to Ukraine, the country willing for Eurointegration. “We sold our traditional food we prepared, and found ourselves with some proceeds,” — he said.

“We confabulated and decided to give this money for charity. We were looking for someone we can entrust the funds we raised… And then we bethought of “Alraid”, whose office I happened to visit about 2 years earlier. We found the brochure on your projects I had since that visit and studied your work in the field of charity… I liked the “Sewing machine for a single mother” project, as it not only helps people, but gives them independence through means of earning their own money… but I was afraid that the funds we raised wasn’t enough for that.”

“We, Who Came Here From Warm Countries, Truly Understand People’s Need For Warmth”

His Excellency added that the Association came up with the “Warm a Family” Project setting out purchasing warm blankets for poor large families of repatriates, and both he and his colleagues from other Asian embassies really liked it: “We, who came here from warm countries, truly understand people’s need for warmth.”

Her Excellency Niniek K. Naryatie noted that the Muslim Community living in her country is the most numerous in the world, so the Embassy staff feel responsible for helping as many needy brothers and sisters in faith as they can. So she asked the AUASO “Alraid” front office to go on sending her descriptions of their future projects, as the Embassy of Indonesia wants to participate as much as they can.