Women contest on Koran recitation gathers participants without regard to age 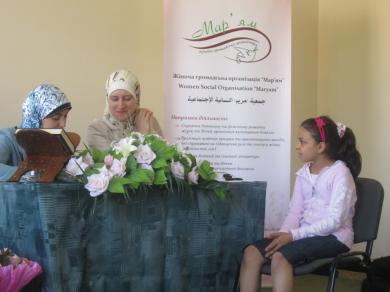 Women contest on Koran recitation gathers participants without regard to age

25 women came to the Islamic Cultural Center in Kyiv on Saturday, to participate in the women contest on Koran recitation, in the three nominations: surah “Ya Sin” (36), surah “The Kingdom” (67), and surah “The Stars” (85). The jury evaluated the participants by the criteria like knowledge of the text, pronunciation, tajuid and beauty of recitation.

In each nomination, competitors were without regard to age, as the youngest one just reached ten, whereas the oldest one had lived in this world more than seven decades.

Awarding the winners and encouraging the participants

Summing up the contest, three prize places were designated in each category; all the prize winners were awarded with diplomas and monetary prizes. The top three places were taken by Tatiyana Voroshilova (surah “Ya Sin”), Sabina Afzel (surah “The Kingdom”), and Mubina Yakub (surah “The Stars”).

Because the organizers took care that nobody should go without something that would remind them of the contest, all the participants got memorial deeds and encouraging prizes. Once the contest was over, the competitors and their fan groups could relax after the intense atmosphere of the contest with a cup of tea with sweets offered to anyone who wished.