Self-improvement through self-education and in-depth understanding of personal motives: training seminar for female activists from “Alraid” 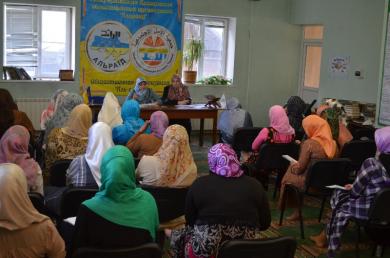 Self-improvement through self-education and in-depth understanding of personal motives: training seminar for female activists from “Alraid”

The All-Ukrainian training seminar for activists from “Alraid” women’s departments was held on May 18 and 19, 2013. The seminar gathering nearly 40 guests from the cities of Kyiv, Kharkiv, Crimea, Lugansk, Dnipropetrovsk, Torez and Lviv was hosted by the Public Organization “Al-Amal”.

Female activists from across Ukraine listened to lectures highlighting the need for self-improvement and self-education, and could learn more about themselves at the training “Sensitivity to motivation”.

Mrs. Samiya Erada, a lecturer from Kyiv, warns that vices have ruining effect for not only the body, but for the soul alike. A believer, therefore, needs to change his/her character to better by adopting the way of patience and striving to non-stop self-education. This principle of living one’s life is very efficient for eradicating one’s vices that are hardly noticed by one, like envy or pride.

The training of Mrs. Tansila Isa, a psychologist, gives illustrative examples of how often the results of our desires and actions may turn to something opposite to what we were actually seeking for. It so happens because everything is driven by personal motives. So, one requires clear priority setting, to have the desired things achieved. Each participant could define her personal motives by her own at the end of the training, once she had passed the test offered by the psychologist.

The second day of the seminar was as eventful as the first one. Mr.Hamsa Isa, chairman of the Donbas division of “Alraid”, referred to ways of the four women who had been promised Paradise by the Most High. The four women are excellent examples of female perfection and righteousness.

Hadija, a wife of Prophet Muhammad (may be peace and blessings upon him), is an honest women who believed in the Messenger without least hesitation, and after that she gave him moral and material support.

Asiya (wife of Pharaoh) defied the Kingdom and worldly benefits. Her husband was not a mere pagan, because he demanded his recognition as a deity from each and everyone. However, this did not prevent Asiya from doing good and caring about people even in this hard situation; and she did not fear to say about her monotheism, when Moses (may be peace upon his) came to Pharaoh with the message.

Mary, mother of Jesus (may be peace upon both of them), was the most pious of the women that had ever lived or would ever live on earth, till the end of time. She relied on her Lord implicitly, if even she could not realize what was happening and could not make reasonable predictions of the consequences.

Fatima, daughter of Prophet (may be peace and blessings upon him), is a perfect example of patience and God-remembrance on the way to the Most High.

The seminar ended up with a walk across Donetsk. Participants visited the Park of iron-shod figures near the stadium “Donbas Arena”, and the Recreation Park where the famous monument devoted to liberators of Donbas is located.

It can be said that the training seminar not only allowed the activists to learn more information, extend their experiences and outline the right personal motives for achieving the goals set by them, but gave them lots of positive impressions from discussions and watching sights of Donetsk that is one of the most densely populated cities of Ukraine.