Chairmen of “Alraid” organizations enhance the competence in fikh 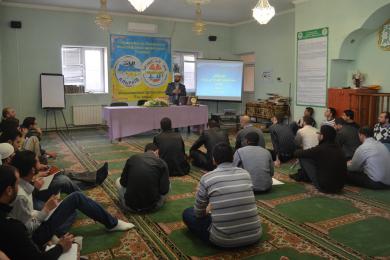 Chairmen of “Alraid” organizations enhance the competence in fikh

The Islamic Cultural Center in Donetsk hosted the seminar on March 2, 2013, organized by “Alraid” Department for Culture jointly with the Shariah Committee at the Religious Administration of Muslims of Ukraine “Ummah”. It is a regular event meant for each new rotation of staff taking high level positions in “Alraid” organizations, as well as for imams of mosques who face the discussed problems in daily life.

More than 40 participants came to discuss the issues in keeping with the Koran and the Sunnah of Prophet Muhammad (may be peace of blessings upon him).

Issues of high relevance for imams

Although issues concerning marriage, divorce, funeral or halal foods are daily ones, only few people are capable to explain their details and nuances.

Mr.Muhammad Alustaz, Imam of the Lugansk Central Mosque, spoke about religious assistance for a dying person and funeral ritual. Issues concerning repentance of a dying one and urging him/her to make the phase “there’s no deity but One God” his/her last conscious words (that is, to die with these words on the lips) were subject to separate discussion. Rules of washing the deceased one, raping him/her up in shroud, recitation of funeral prayer and burial were also discussed.

Halal meat for all who wishes

The meaning of “halal” in Islam was elucidated by Mr. Imad Abu-r-Rubb, Imam of the Islamic Cultural Center of Odessa. He explained peculiarities of and necessary conditions for slaughtering cattle in Islam and compared it with ways of slaughtering cattle in most slaughtering and meat processing plants of Europe.He illustrated his lecture by a video clip about cattle slaughtering in Ukrainian plants and continued it by telling the audience about “Alraid” effort to launch industrial production of halal meat, in order to meet the needs of Ukrainian Muslims.

Mr.Shadi Othman, chairman of the “Alraid” Cultural Department, made comparison of the meaning of family in Islam and categories of marriage practiced now on the Ukrainian territory. He made reference to marriage conditions in keeping with the Sunnah of Prophet Muhammad (may be peace of blessings upon him); reminded the duty of the faithful to do their best to prevent family ruining, rules of divorce whenever break off becomes inevitable.

He drew imams’ attention to the need to enlighten Muslims in matters concerning marriage and divorce, because, unfortunately, too many people are ignorant in matters of family life and have quite poor idea (understanding) that, apart from rights, they have obligations and duties before wife or husband (which are many more than rights) and that family means huge responsibility for which each Muslim shall be asked in Judgment Day.