Interactive quiz: not only erudition but activity, too, is required for victory 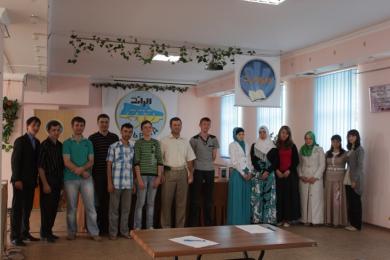 Interactive quiz: not only erudition but activity, too, is required for victory

The final round of the interactive quiz “Learning more to win”, undertaken by the Public Organization “Emel”, was hosted by the Islamic Cultural Center in Simferopol, on May 12, 2013. Its first phase was on-line: all who wished could register, answer the questions from the organizers, and ask each other questions on a fixed list of subjects, covering history and culture of Islam, traditions and history of Crimean Tatars, and geography of Crimean peninsula.

Fifteen most active participants winning the largest number of points for right answers and interesting questions were selected by the jury as the contestants for the prizes, which were three tablet computers.

Analogous quizzes, God wills, will be attracting more and more participants
The final phase consisted of the three tournaments. In the first two tournaments, where the participants had only ten minutes to answer questions on the history of Islam and Crimea, respectively, each two of the three contenders for main prizes dropped out. Five competitors with the largest number of points passed to the third tournament, where they were to answer the questions from moderators as quickly, precisely and extensively as possible.

Summing up this persistent and thrilling contest, the winner was Izet Isayev, the youngest participant. The second and the third places were taken by Shevket Habipov and Enver Bekirov, respectively. The boys were happy to have these cherished prizes, although they said that the main prize for them still was new knowledge, skills and experiences.

The organizers expect to undertake the quiz on regular basis. God wills it will be attracting more and more participants.