Seminar in the town of Rovenky, Donetsk region: methods to eliminate imbalance in family relations 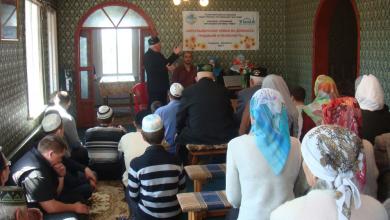 Seminar in the town of Rovenky, Donetsk region: methods to eliminate imbalance in family relations

This seminar was held on April 27, 2013, as part of the family cultural and educative caravan organized by the Donbas unit of the All-Ukrainian Association of Social Organizations “Alraid”. More than fifty local Muslims came to discuss issues important for all the Muslim families in Ukraine as well as the ones raising much more concern in their region.

Apart from the traditional themes like education and upbringing of children at family level and advice on how a spouse should be chosen, problems of already established families were put to discussion.

A major part of Muslim families in the region can be divided into four categories. The first (ideal) one is when both husband and wife are practicing Muslims. The other three feature problems either at the phases of family creation (when parents are against a spouse of a different faith or nationality) or at the phase of the subsequent family life.

Family discord escalates when it comes to upbringing of children

These problems usually escalate when it comes to upbringing of children, because the spouses can hardly agree on the system of values in which a child will be brought up, on a dress code or spending leisure time…

As far as the other categories are concerned, Muslim husband and non-Muslim wife is not the only possible case, as there may be vice versa cases, quite probable for the Donbas region, when a Muslim woman marries a non-Muslim man. This creates difficulties in upbringing of children, as non-Muslim mother is not able to teach children all the nuances of daily religious practice when Muslim father is at work, and non-Muslim father usually objects to upbringing of his children in Islam.

Not lesser (or even bigger) problems may occur when both husband and wife, either real or potential, are the so called “ethnic Muslims” being incompetent in religion. When both take traditions of their families or nations as a true Islamic religious teaching, the conflict will be inevitable even in specific matters.

That is why audience and Mr.Rafik-Hazrat Abzi, Imam of Rovenky mosque, thanked wholeheartedly the caravan organizers for useful advice that, God wills, will help to keep many families preserved and strengthened.