Seminar and psychological test: steps on the way to family harmony 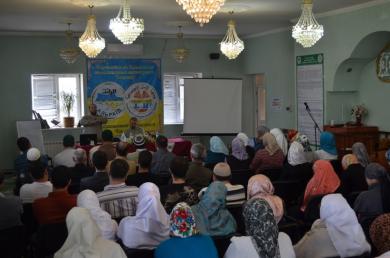 Seminar and psychological test: steps on the way to family harmony

A family seminar hosted by “Al-Amal” organization on April 21, 2013 in the Islamic Cultural Center (Donetsk) drew attention of Muslims from other cities of Donbas region, like as Lugansk, Konstantinovka, Torez etc.

Spouses and young people still expecting to commit to marriage bonds were eager to learn more about the harmony of marital relations, as Prophet (may be peace and blessings upon him) had a good reason to say: “The most perfect faith is truly with the one who is kinder and better behaved than others with respect to his family”.

Also, all who wished had a chance to learn more about themselves by passing a free-will psychological test on emotional intolerance, its results being made confidential. These results would probably help the participants in revising some of their moral qualities and correcting mistakes.

This Koranic ayah was recited by Mr. Muhammad Al-Ustaz, imam of the Central Mosque in Lugansk, when opening the seminar to remind the audience about permissibility of family conflicts and misunderstandings. The Most-High knowingly describes the meaning of marriage by this metaphor, to show equality and complement of each party in marriage, psychological support to each other and scrupulous performance of family roles by each.

Love and harmony between man and woman in the friendly and blessed family atmosphere is the degree bringing a person closer to Divine pleasure, with infallible evidence found in the sublime way of Prophet Muhammad (may be peace and blessings upon him).

Right choice of a spouse: a guarantee for future agreement in upbringing and educating of children

One sign of marital life is the birth of posterity. Today, Muslim families face problems with upbringing and educating children in non-Muslim societies, not known by their fathers and forefathers, because globalization and imposing of “consumer society” life styles may lead young generations too far from traditional values.

Mrs. Tanzila Isa, head of the women’s department at “Alraid” unit in Donbas region, spoke about an acute problem of how the children can be brought up in a righteous way. The answer is to be found in parents and their agreed standing, as children are more prone to follow practically mother’s or father’s ways rather than hear their instructions. When there’s no agreement between parents, the child will immediately learn to exploit the disagreement to have his/her whims met.

To have understanding and agreement once the posterity is born, one needs to have clear awareness of who exacty is being chosen as a spouse and what is the background for this choice. Mrs. Dinara Valeyeva told what moral qualities need to be considered first and foremost, to avoid the choice of inappropriate spouses.

After the official part of the event, guests were traditionally invited to tea-party where they could talk with each other, share impressions, advice and personal experiences.