Tournament on mini football has started in Odessa. Wait for it in other Islamic Cultural Centers of “Alraid”! 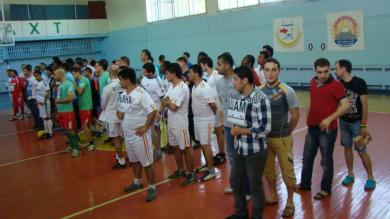 Tournament on mini football has started in Odessa. Wait for it in other Islamic Cultural Centers of “Alraid”!

The tournament on mini football, started in Odessa on May, 3, 2013, will last till May, 10. The Islamic Cultural Center in Odessa has been organizing this competition for eight consecutive years now.

The tournament brings together Muslim students from various ethnic groups, either permanent residents of Ukraine or ones coming for education purposes. Besides that, sports are conducive for healthy way of life propagated by Islam.

By tradition, the contest started with recitation of the Holy Koran, surah “Al-Fatiha” (“Opening one”). Twelve teams representing Afghan, Turk, Palestinian, Chechen, Kurd, Syrian, African, Uzbek and other ethnic communities of the city compete in the athletic hall of the Odessa National Academy of Food Technologies.

Analogous competitions will be held for the whole month at Islamic cultural centers of “Alraid” in various Ukrainian cities. Registration and participation in them is open for all who wish.